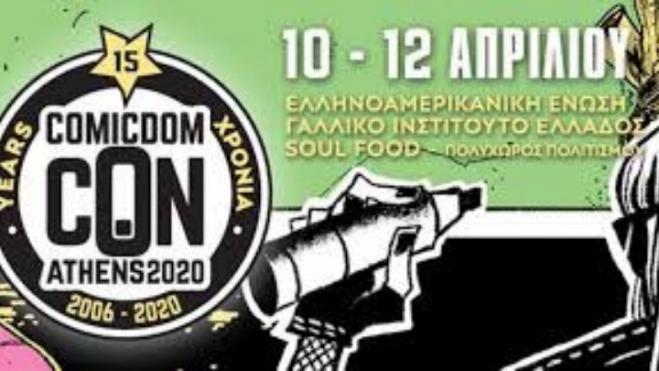 Comicdom, Greece's longest-running festival exclusively devoted to comics, is scheduled for April 10-12, 2021 at the Hellenic American Union (HAU) and the French Institute of Greece, as well as at the Soul Food Cultural Space.

The festival, in its 15th consecutive year, will once again be free to the public.

This year's guests include Croatia's Esad Ribic, artist for Marvel Comics, as in the title "Loki, Silver Surfer: Requiem" and for the iconic event Secret Wars, and France's Emile Bravo, artist for the popular Franco-Belgian comics Sirou and recipient of the Rene Goscinny Prize.

A collaboration betwen IMPS and the Embassy of Belgium in Athens will bring the international show "Think Blue, Think Strumpfs (Smurfs)" to the HAU's Hadzikyriakos-Ghika Hall.

An anniversary section on the show's 15 years will highlight the "stars" of the art, including Milo Manara, David Lloyd and John Romita, Jr., along with well-known Greek artists like Ilias Kyriazis, Michalis Dialynas and DaNi, who will be showing original works exclusively for the festival.

The honoree of this year's show will be the Czech Republic, with the exhibit "100 Years of Czech Comics" and an exhibit for children, "12 Worlds", showcasing 12 children's book illustrators.

As every year, there will be new and old comics for sale from Greek stores and publishers at the Artists Alley and the Self-Publishers Alley.

Additional offerings include workshops on film scripts and illustration by international guests and Greek creators, public talks, film screenings, new comics appearing for the first time publicly at Comicdom, a program for children.

The three-day event will wrap up with the awarding of the Greek Comics Awards and the very popular competition, Comicdom Cosplay, a national event leading to the European championship Eurocosplay, taking place in London.