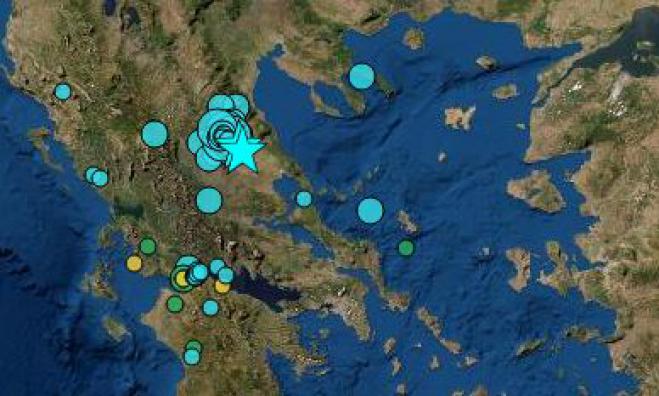 The "alarm" for the possible consequences of the great earthquake in Elassona that struck in the early afternoon was sounded by the seismologist Costas Papachazos.

The quake caused real terror to the residents, who came out anxiously on the streets of the areas where it was felt. According to information, there is a case of a man trapped in a building that collapsed in the village of Mesochori.

Some older buildings collapsed, partially or in total, but fortunately, no victims have been registered so far. People are outdoors and the earth is still shaking from numerous aftershocks.

Professor Efthymios Lekkas claimed that a strong aftershock sequence is expected, calling on those in charge to remove children from schools and people from public buildings, at least for the next few hours.

Papazahos: A big earthquake can not be ruled out
For his part, Professor Costas Papazachos, speaking to ERT, said that the earthquake occurred in the Damasiou fault, which has been studied in detail by the Aristotle University of Thessaloniki, due to its history. "The area has rich seismological data and we had studied the possible effects of a large earthquake. The earthquake has come," said Mr. Papazachos initially and added: "It needs attention because it will have a rich post-earthquake sequence. Beware of older buildings. If they have any problem not to live, until the crews and engineers of the state investigate them "

"Under no circumstances should the schools operate"
According to Mr. Papazahos, this rift can give up to 6 to 6.2 Richter, "but I believe that it has exhausted its potential. However, it is not ruled out that it will give 5.5 and cause equally serious damage ". The experienced seismologist stressed that the damaged houses should not be inhabited "for at least a week" as "there is a huge risk of collapsing with a possible earthquake".

As for the schools, the seismologist stressed that under no circumstances should they operate for the coming days. "It is impossible to conduct a lesson in a building that can dance around due to earthquakes of 4 or 4.5R. Schools will have to close for a few days. "Even if it is undamaged, it is dangerous for someone to put children in a building that will move and for someone to be injured due to panic," he concluded.

An earthquake measuring 4.7 on the Richter Scale, with its epcicentre in the west of the region of Karditsa and Trikala in central Greece was recorded at 11:24 by Athens Geodynamic Institute.

Greek Tourism Minister called on regional authorities across the country to capitalize on the growing potential of Greek tourism and tap into local offerings ensuring balanced and sustainable growth across sectors and communities.