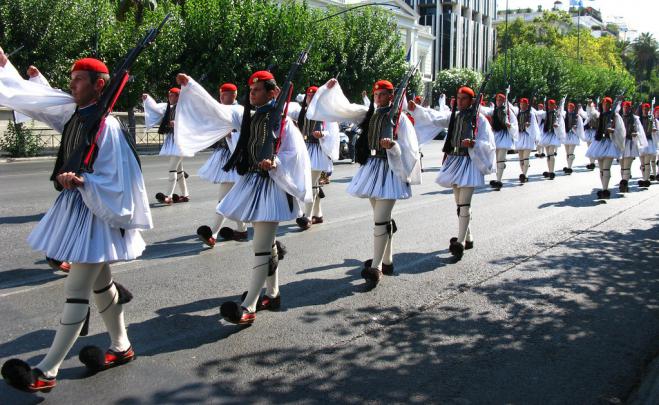 As the Parade Committee of the Federation of Hellenic Societies of Greater New York  has nade known, there is confirmation by the Presidency of the Hellenic Republic that a contingent of the Presidential Guard Corps, the Evzones, will travel to New York to march in the diaspora's Greek Independence Day Parade, on June 5th, 2022, on Fifth Avenue, take part in our other parade events and uplift the spirits of the Greek-American Community

The Parade Committee expressed its gratitude to His Eminence Archbishop Elpidophoros of America for his intervention with the President of the Hellenic Republic, H.E. Katerina Sakellaropoulou, as well as for the commitment of the Greek Orthodox Archdiocese of America to assume all the expenses related to the Evzones trip. The committee also thanked other prominent Greek-Americans for their effective efforts with the Prime Minister of Greece, Kyriakos Mitsotakis and the Minister of National Defense, Nikos Panagiotopoulos.

The Evzones delegation (18 soldiers and 4 officers) are scheduled to arrive on Thursday, June 2nd and depart on Monday afternoon, June 6th.

The Parade Committee also announced that the Grand Marshals of this year parade will be:
1. His Eminence Archbishop Elpidophoros of America, in recognition of the efforts and contributions of the Greek Orthodox Archdiocese of America, and in celebration of its Centennial since its founding in 1922.
2. The Hellenic Caucus of the US Congress and its co-chairs, Hon. Carolyn Maloney (D-NY) and Hon. Gus Bilirakis (R-FL).
3. The Greek-American Congresswoman Hon. Nicole Malliotakis (R-NY)
4. The Olympic gold medalist, Fani Chalkia

In addition, Honorary Grand Marshals of this year parade are:
1. The great Greek-American organization AHEPA and its Supreme President Dimitris Kokotas. It is noted that this year, AHEPA celebrates its own Centennial with numerous contributions to Hellenism and Orthodoxy.

2. The Cypriot organizations of the United States: Federation of Cypriot American Organizations, the International Coordinating Committee, Justice for Cyprus (PSEKA) and the Pancyprian Association of America along with their Presidents
Kyriakos Papastylianou and Philip Christopher.

3. The Chian organizations of the USA in commemoration of the Chian Massacre of 1822, 200 years after this tragic event, Chian Federation, Panchian Society "Korais" and the United Chian Associations of America, as well as their presidents Ioannis
Kontolios, Panagiotis Gerazounis and Dimitris Kontolios.

The Greek Independence Day Parade Committee invites everyone (associations, organizations, Parishes and individuals) to attend the last two Parade meetings (Panomogeneiakes) on Thursday May 26th and Thursday June 2nd respectively, at 7:30
p.m. at the Stathakio Cultural Center as well as, to all other parallel parade events listed below:
• Raising of the Greek flag at the Bowling Green in Manhattan, in the presence of the Presidential Guard Evzones, on Friday, June 3rd, at 12:00 noon.
• Raising of the Greek and the American flags at Athens Square Park in Astoria, on Saturday, June 4th, at 12:00 noon in the presence of the Presidential Guard Evzones. In addition, the Hellenic Air Force Philharmonic Band will play the national anthems of Greece and the United States.
• The Parade Gala that will be held on Saturday, June 4th, at 7:00 p.m. at the New York Hilton Hotel, in honor of Parade Grand Marshals as well as of Honorary Grand Marshals.

Twenty-four hours ago, Justin Trudeau was walking through a sea of supporters at the Halifax Seaport's Farmers Market – but Sunday, he was parading alongside Montrealers in the annual Greek Independence Day Parade.

This year's 78th annual Greek Independence Day Parade commemorating the 195th Anniversary of Greek Independence from the Ottoman Empire is set to march up Manhattan's Fifth Avenue on Sunday, April 10, 2016. More than 40 floats, 20 bands and 100,000 participants will take part in this year's parade, which kicks off at 1:30pm from 64th Street and continues to 79th Street.