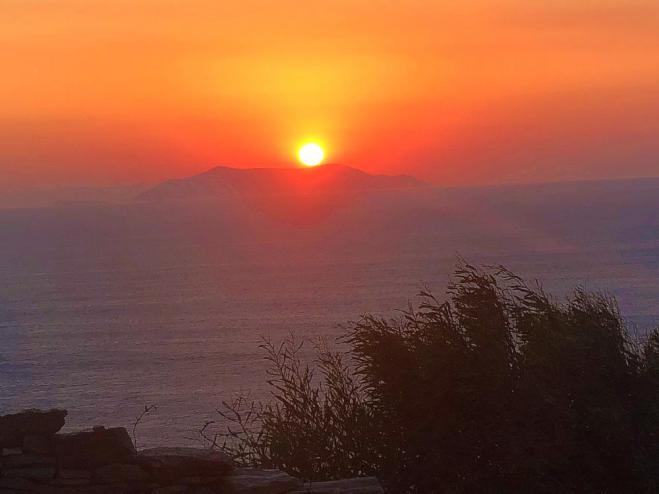 The Cycladic Island of Tinos has been a destination for the faithful after the discovery of the miraculous icon of the Annunciation of the Virgin Mary in 1823. Tinos, a forgotten island amongst cosmopolitan tourists, has become a popular destination throughout the last few years after visitors discovered what the island truly has to offer.

Tinos has a vast ancient history, hidden beauties with imposing mountainous terrains that run into the sea and are inhabited by goats that eat the abundant thyme bushes. There are geological wonders, sandy beaches, over 40 quaint villages, and magical hiking paths. The island is famous for her marble, which adorn and accent all the streets, buildings, and homes, and of their very own Tinian artists, Chalepas, Gyzis, Filippotis, Sochos and Lytras, who are revered throughout Greece for their sculptures. Worth noting for foodies is the island’s traditional cuisine and delicacies that are worthy of many culinary awards. Tinos is sure to be a wonderful surprise that won’t disappoint and will keep you coming back.

Upon disembarking from the ferry which is about 2 hours from either the ports of Pireaus, Rafina or Lavrio in Athens, one is met with the enchanting, whitewashed Cycladic architecture and a wide beautifully paved marble street that begins at the main round about, and ends up the hill at the blessed church of the Dormition of the Virgin Mary. The surrounding marketplace offers great souvenirs, clothing stores, and many restaurants and café’s to choose from. 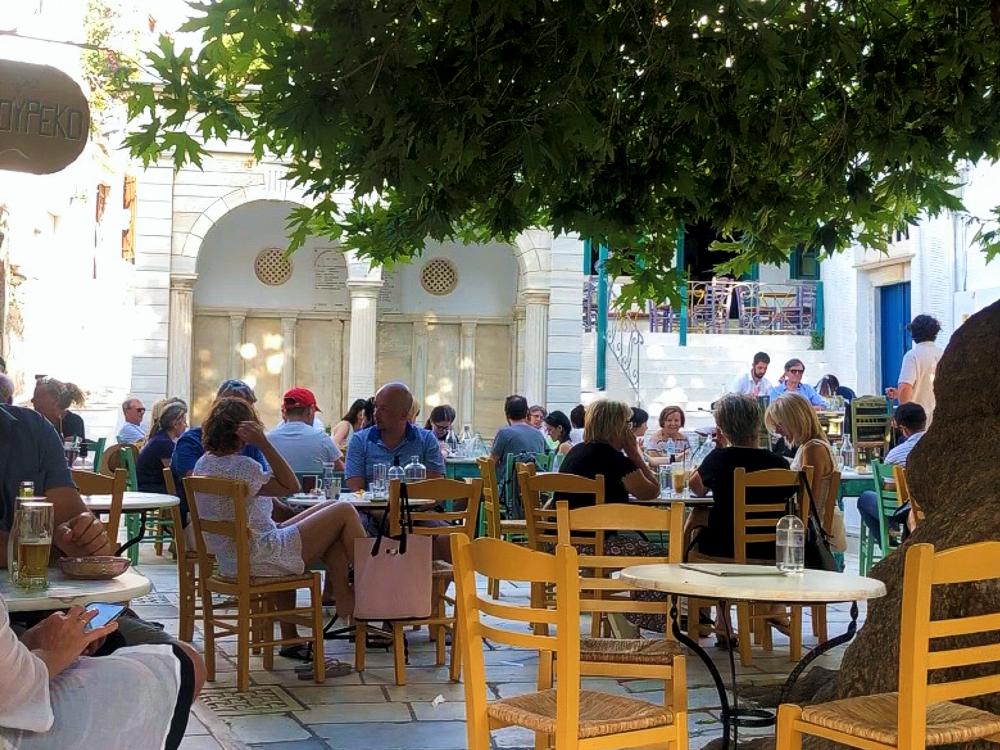 Annunciation of the Virgin Mary

The main attraction of the island is the miraculous icon of the Annunciation of the Virgin Mary which was discovered in 1823. The blessed mother has been known to hear the prayers of the faithful who flock to the island to ask for her help, and in return, a promise known as a “tama” is made if their prayers are answered.

The island is especially busy during the Greek Orthodox celebration of the Dormition of the Virgin Mary on August 15th, and the many other festivities that take place in the surrounding villages.

Story has it that the Tinian nun Pelagia was the instrument in finding the icon after several visions from the blessed mother, Virgin Mary in 1822. With the help of the Mother Superior, the Bishop Gabriel and locals, excavations began, and after many attempts, they finally found the miraculous icon from a 10th-century church that was destroyed and burned during a pirate raid. They also found a source of water under the church of which is known as the life giving well. They slowly began reconstruction of the church and finished the temple of Annunciation in 1826. The church is a tripartite Basilica form, the door of the facade guides you into the Holy Icon, and the Bell tower is the magnificent work of the sculpturer Ioannis Fillipotis. The marble columns at the front of the façade were used from the ancient temples of the island and from the neighboring ancient archeological island of Delos, known as the birthplace of Apollo and a major religious center during the 1 st millennium BC. The magnificent mosaic floor paves the way into the blessed church. 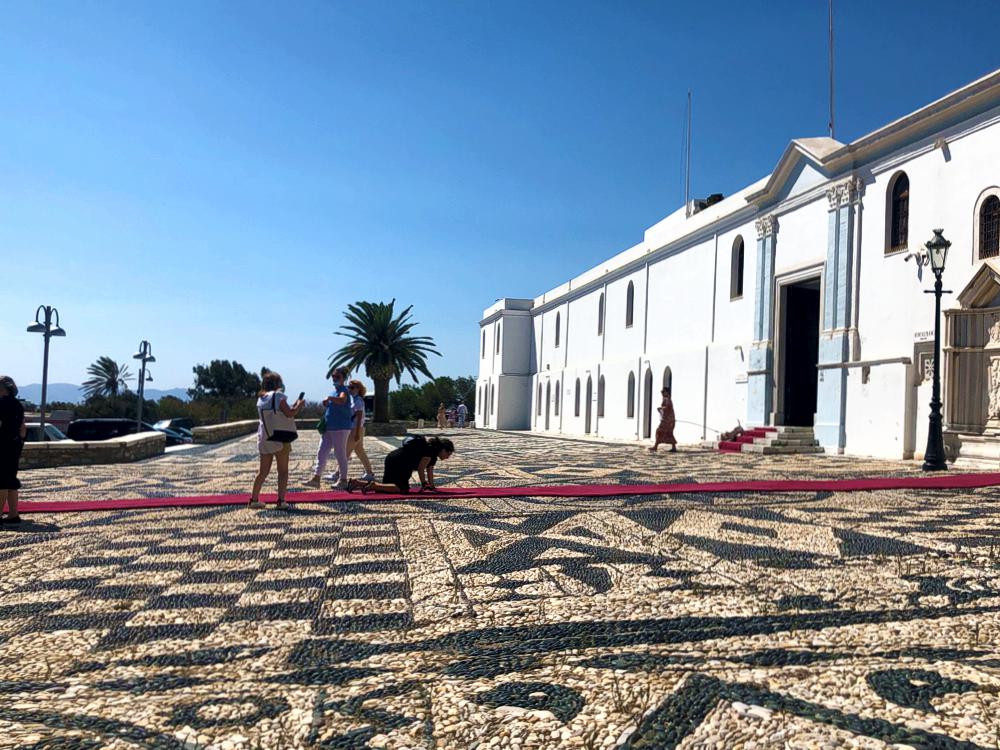 The nun passed away of old age and was named Saint Pelagia for her devotion to her faith. There are 5 museums within the temple complex that house antiquities with a collection of treasures from Delos, and many icons and historical artifacts throughout the years.

Tinos’s ancient history dates to the early bronze age (3000-3200 bc), the settlements fortified stone walls still stand until today, and there are findings from the Mycenean period north of the village Pyrgos. The island faced naval raids and unrest during 1100-900 BC which led to relocations of settlements from the coastlines to the center of the island in naturally fortified areas. The ruins of cyclopean walls can be seen today under the Venetian fortification at the village of Exomvourgo. In antiquity the island was called Tenos and Hydroussa because of the abundance of springs and was also called Ophiussa because in antiquity the island had snakes.

Myth has it that the sons of Boreas were slain by Hercules on the island and that’s why it is windy. The names of Tinians were also inscribed on the tripod of Delos on the list of Greeks who helped overthrow the Persians. The inhabitants of Tinos helped form part of the Delian League and played a great role in ancient Greece, and often referenced in ancient history. During the Roman occupation, Marcus Antonius granted the island to Rhodes. After the capture of Constantinople by the fourth crusade, Tinos was one of many islands ruled by the Venetian empire until 1715 when it was captured by the Ottomans, only to be overthrown in 1821 when the inhabitants joined the rest of Greece in the War of Independence against the Ottomans. Due to the long occupation of the Venetians, the island has a large Roman Catholic Population which co-exists wonderfully on the island. 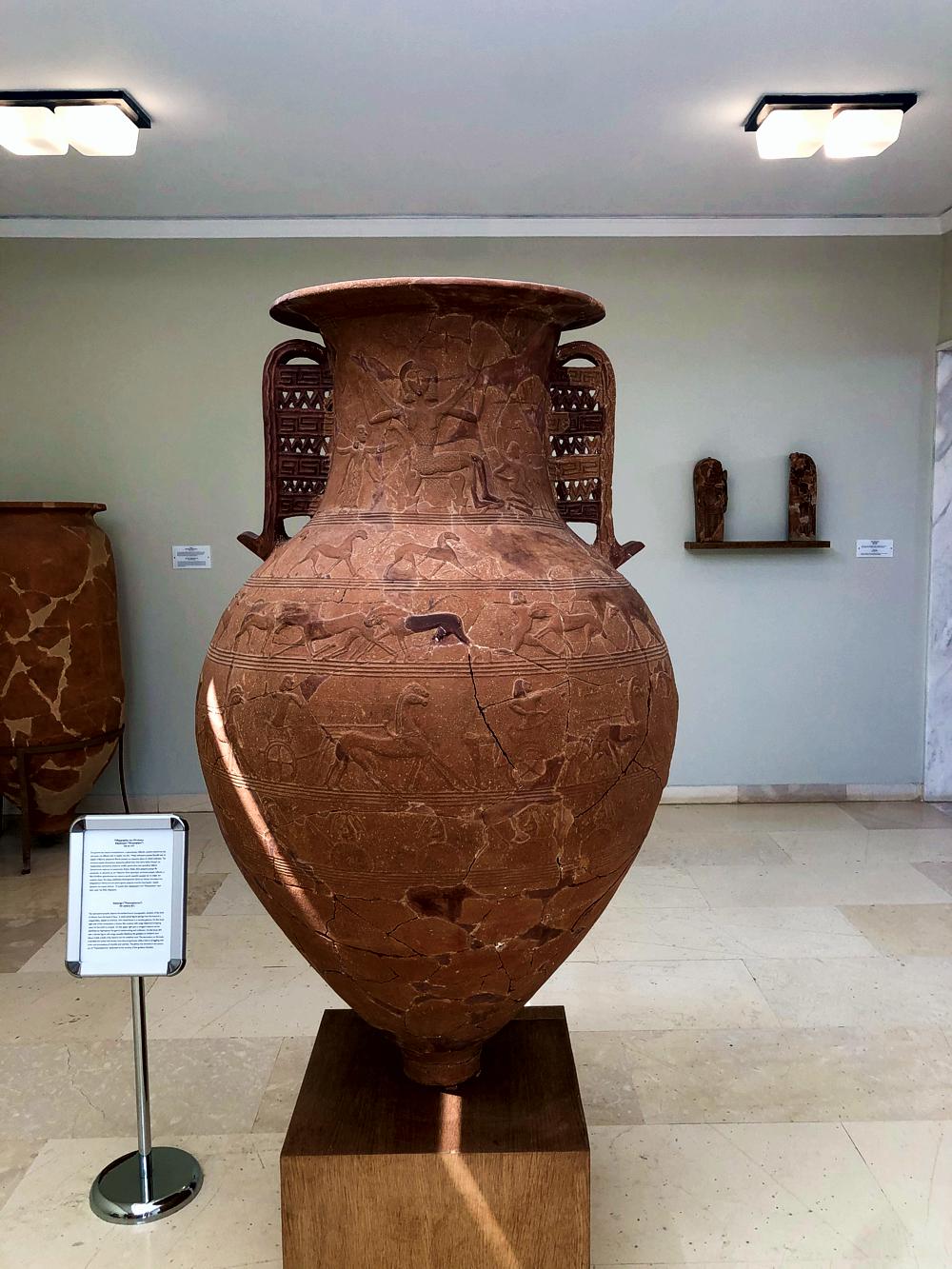 There are over 40 picturesque villages to visit and explore from, which include Pyrgos, Volax, Exomvourgo, Kardiani, Isternia, and Loutra to name a few.

Pyrgos- the village of marble of which you know you have arrived when met with the bus stop that is adorned with marble. Volax, the village of geological stones from a meteor that is said to have hit the island in antiquity, and where homes are decorated with famous Greek poems that visitors read as they stroll by and contemplate on the words. The fortified village walls of Exomvourgo still stand today, and the village of Loutra is abundant in springs. Isternia is amphitheatrically built and there is a lovely bay on the seaside part of the village.

The beauty of the island is the use of the geological rocks in the villages, mosaics that adorn the streets and entrances of homes and building, and the quaint town squares where one can enjoy a delicious meal or coffee and desserts, while enjoying the village’s architecture under the dreamy sycamore trees.

The island is abundant in fish and goat, thyme and oregano and the local delicacies include artichokes, capers, cheeses. The famous desserts include loukoumia, galaktombouriko and almond pastries. Anywhere you chose to dine is a culinary experience with local produce, however my favorites include traditional taverns such as Tsambias in Kionia, traditional with a twist at San to Alati, and for foodies, you must experience the culinary excellence of Chef Fotini’s dishes at Thallassaki at Isternia Bay. Every dish is carefully thought out, and the flavors explode in every bite, while dining next to the sea. A magical experience. 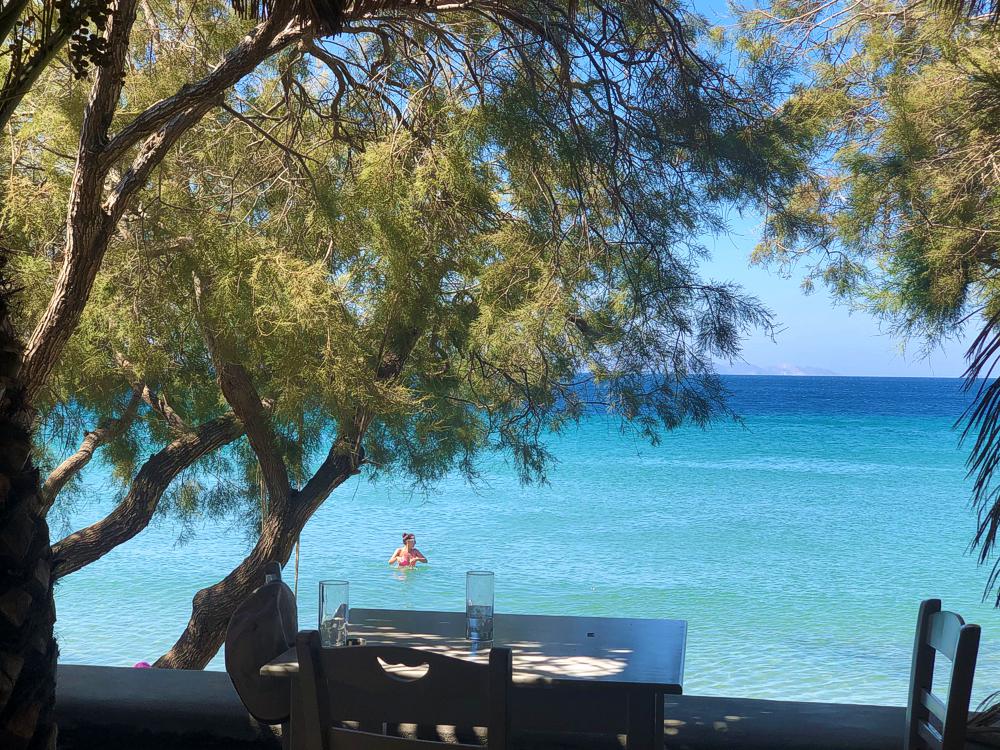 There are over 14 sandy beaches to choose from on the south of the island, many are quiet and relaxing while others offer beach bars. Chose to your liking, my favorite is Agios Romanos.

Neighboring islands that are fun to hop over on day excursions are Mykonos, Paros, Syros, and Naxos. 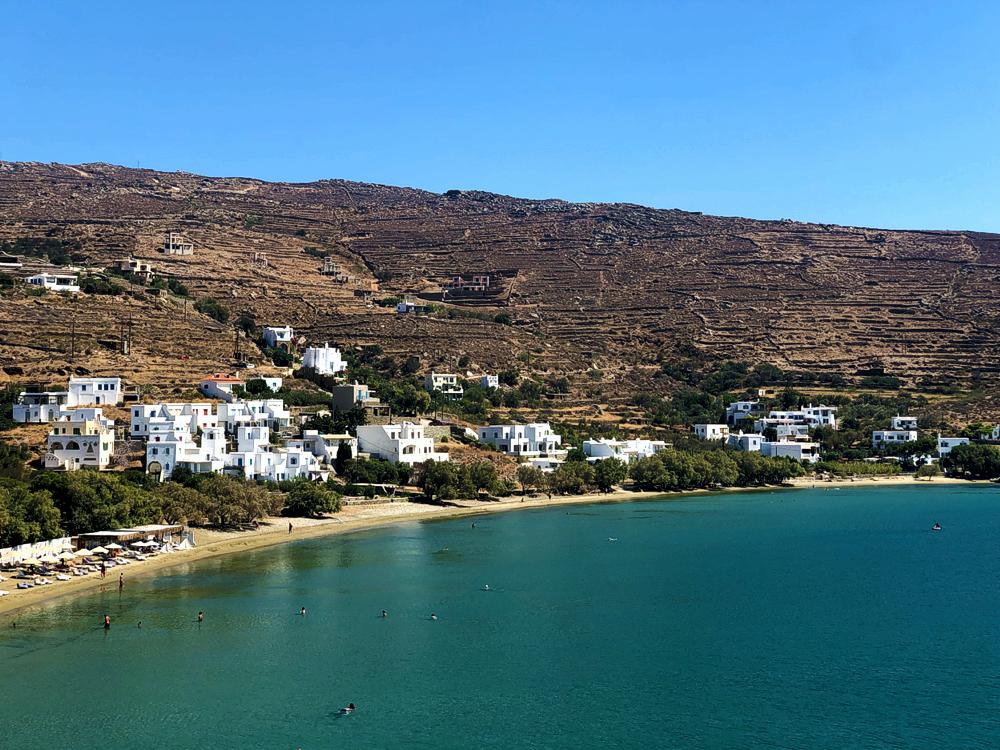 After visiting Tinos, I am sure you will agree it is truly a best-kept secret. Before leaving the island, grab some local sweets by the port!