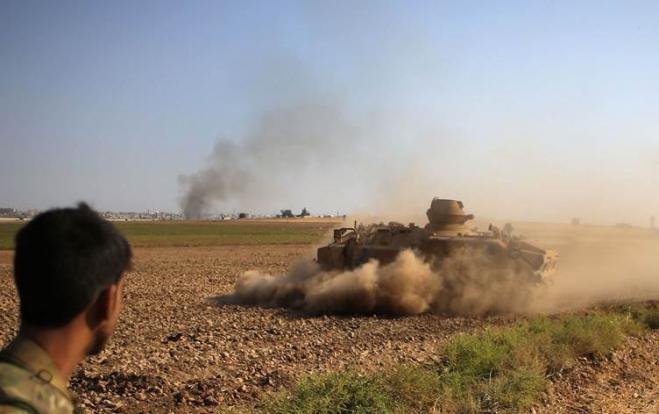 Bearded fighters walk through an area they claim to be the entrance to Sari Kani, the Syria-Turkey border town where the Kurdish-led Syrian Democratic Forces (SDF) have resisted an onslaught from the mighty Turkish army for four days.

“Allahu Akbar! Allahu Akbar!” one of the Arabic-speaking fighters shouts to the camera with other fighters in tow. “The Azaz Forces … are entering the doors of Ras al-Ain, Allahu Akbar,” referring to the Kurdish town by its official, Arabic name.

Turkish-backed Syrian forces have been accused of extensive human rights abuses in the city of Afrin, under their control since March 2018. These same forces are now on the border with Rojava, the self-administered region in northeast Syria controlled by the SDF.

Close to 200,000 civilians have fled the pounding of the area by the invading Turkish army and their Syrian proxies. More than 40 civilians have died, according to the Syrian Observatory for Human Rights. SDF spokesperson Redur Khalil on Saturday put the number of SDF fighters to have died at 45.

In a separate video posted on a proxy-affiliated Telegram channel named Operation Peace Spring, two civilians and a young man purportedly wearing military fatigues, are surrounded roadside by a group of the Turkish-backed Ahrar al-Sharqiya proxy force. Other fighters swirl around them.

The video caption claims the video of the three men was recorded on the Manbij-Hasaka road on Saturday, the same day the Turkish army claimed to have taken Sari Kani – a claim disputed by the SDF, who say the battle for control of the city still rages.

“We have captured three fleeing militia of the PKK… Allahu Akbar…” says a man whose face is not shown, at which time other fighters shout “Allahu Akbar.”

The three terrified men, one of whom is bleeding from his nose, crouch by the side of the road.

Towards the end of the video, one Ahrar al-Sharqiya fighter can be heard faintly: “We know what are going to do to you.” The video cuts.

Late on Saturday, another video showing Turkish-backed Syrian fighters surrounding a number of men by the side of a road appeared on social media.

The fighters are in clothing identical to those posted on the Operation Peace Spring channel.

“Allahu Akbar, film me, film me,” one of the fighters shouts as he empties his AK-47 into the supine body of a man as dust rises from the ground. Another appears with a sniper rifle and shoots the man. “The pigs of the party,” another one shouts, referring to the main political party in northern Syria, the Democratic Union Party.

Gunfire could be heard in the background. With a final shout of Allahu Akbar, the video is cut.

On Saturday, the general staff of the Syrian proxy forces, known as the “National Army,” issued instruction - a copy of which was posted on Twitter - banning fighters from recording any event in the battlefield. Under international humanitarian law, any torture or inhumane treatment of prisoners of war and civilians is considered a war crime.

An SDF source told Kurdish media Saturday that three individuals were killed by the Turkish-backed forces, two of whom were civilians and the third one a member of the Asayesh, the internal SDF security force. One of the civilians was a health worker.