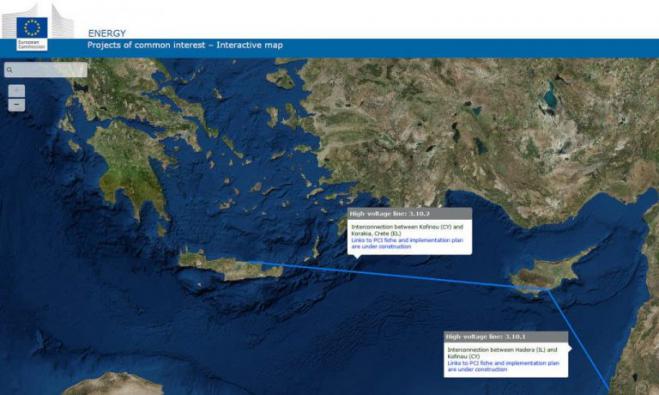 In the presence of the President of Cyprus, the European Commissioner for Energy Kadri Simson, the Cypriot Minister of Energy Natasa Pileidou and the Minister of Energy of Greece Kostas Skrekas, the inauguration of the projects for the EuroAsia Interconnector will take place next Friday, 14 October, at the Presidential Palace in Nicosia.

This is the EuroAsia Interconnector project which will have a total length of 1,214 km and a power of 1 GW during the first phase. In January 2022, the European Commission approved funding of 657 million euros for the part of the interconnection between Greece and Cyprus.

According to a report by "Fileleftheros", the works on the ground are expected to start soon, in an area near Kofinos, under the management of Siemens, with the aim of being completed in 2027. The double cable that will be used will be supplied by Norwegian firm HVDC Nexans.

With the operation of the interconnection, Cyprus will cease to be the only isolated energy market in the EU and will be able to import cheap energy from European markets, for the development of competition and energy security, but also to export electricity, based on a very flexible system of changing the direction of the flow in the cable.

The staff of EuroAsia Interconnector firmly believe, based on studies, that Cyprus has all the foundations to become an exporter of electricity that will be produced, at a very low cost, from renewable energy sources and will be channeled to European buyers. The operation of the interconnection will allow a large increase in the production of electricity from photovoltaics, even if there is no development of cheap energy storage or an upgrade of the Electricity Authority of Cyprus network until then.

A key pillar of the vision of interconnection with the European network, of which the EU is also aware, is the operation of the EuroAsia Interconnector for the benefit of Greek Cypriots and Turkish Cypriots, either as producers and exporters, or as consumers, given that already, in the context of implementing measures building trust, the Electricity Authority of Cyprus network is connected to the network that electrifies the occupied territories.

The interconnection project is financed with 657 million euros by the EU, through the "Connecting Europe" program. This is the largest financing of a project in Cyprus, but also the largest financing of a similar project in the EU. In addition, the project will be financed with 100 million euros from the Cyprus Recovery Plan. The total cost, after the recent jump in the prices of raw materials, is estimated at close to 1.7 billion euros. Agreements have already been concluded for additional financing, including from the European Investment Bank (EIB).