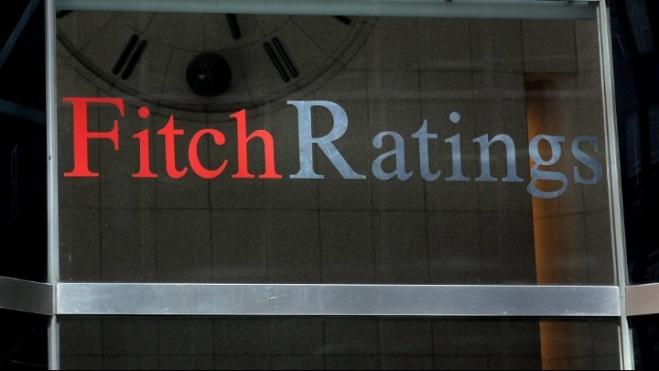 As Fitch explains in the report justifying its decision, the high debt and non-performing loans offset the positive elements that would justify an upgrade.

Structural Indicators, Debt Levels: Greece has income per capita that far exceeds the 'BB' and 'BBB' medians. Governance scores and human development indicators are among the highest of sub-investment grade peers. These strengths are set against the legacies of the sovereign debt crisis, which include large stocks of public and external debt, and a still high, albeit rapidly declining, level of non-performing loans (NPLs). The Positive Outlook reflects an expected decline in public sector indebtedness, in the context of still low average borrowing costs, and a degree of expected resilience of the Greek economy, despite the worsening of the economic outlook for the eurozone in recent months.

Public Debt Levels, Mitigants: Fitch's public finance projections point to a steady decline of the government debt/GDP ratio through 2024. We expect the debt ratio to fall to 175.4% by end-2022, below its pre-pandemic level and down from 193.3% at end-2021. The debt ratio will then edge down to 174.4%, before reaching 170.4% at end-2024, as the primary budget balance returns to surplus. The debt ratio in 2024 is still forecast to be among the highest of Fitch-rated sovereigns, and more than 3x the 'BB' median.

At the same time, there are mitigating factors that support debt sustainability. Greece's liquid asset buffer is substantial (forecast to be close to 17% of GDP at year-end). The concessional nature of the majority of Greek sovereign debt means that debt-servicing costs are low and amortisation schedules are manageable. Proposed statistical reclassifications by Eurostat would cause guarantees to the financial sector issued under the Hellenic Asset Protection Scheme (HAPS) to be included in the stock of general government debt. At present this would raise the level of debt by EUR13.8 billion (8.8% of forecast 2022 GDP).

Government bond yields have risen further over the last three months, with the 10-year yield just under 5.0% in late September. However, the interest-to-revenue ratio will rise only gradually to around 6% in 2024 ('BB' median projection: 9.0%). The average maturity of Greek debt is among the longest of any sovereign, at around 19 years. Moreover the debt is mostly fixed rate, limiting the impact of market interest rate rises.

Government Support, Deficit, Budget: The net cost to this year's budget of government support measures to alleviate the impact of energy prices is around EUR4.5 billion (around 2.2% of forecast GDP). The gross amount of support is around four times higher, but is offset by a clawback mechanism that levies utilities' supernormal revenues. Revenue buoyancy and the unwinding of pandemic support measures mean that the general government deficit this year will fall to 4.5% of GDP from 7.4% in 2021.

The 2023 draft budget envisages discretionary measures with a cost estimated by the government at EUR3.2 billion (around 1.5% of forecast GDP). The weaker macroeconomic environment and the new deficit-increasing measures mean we have revised up our deficit forecast for 2023 to 3.5% of GDP, from 2.4% in July. With the rebound in economic activity in 2024, the deficit will fall to 2.3%.

Fitch's public finance projections imply that the primary budget balance will be in deficit this year and next (-2.2% and -0.9% of GDP, respectively), and then return to a small surplus in 2024. The government's draft budget envisages a return to a primary surplus in 2023. Our more pessimistic macroeconomic outlook is the main driver of this difference. A key risk to public finances is that higher than expected energy prices will be followed by further subsidy increases, in particular in view of a parliamentary election due by July 2023.

Macroeconomic Resilience, Slowdown Expected: The Greek economy expanded at a robust pace in the first half of the year, with real GDP increasing by 8.4% compared with the same period a year earlier. The macroeconomic outlook has worsened sharply in recent months, with the Russian invasion of Ukraine exacerbating the rise in energy prices and affecting confidence, and high inflation hitting real incomes and consumption dynamics. We now assume a full or near complete shut-off of Russian pipeline gas to Europe. Despite the slowdown in activity in the second half of this year, real GDP growth this year will be 5.5%. Economic activity will stagnate in the first half of next year, before picking up in the second half. The weak carryover effect implies a negative growth rate for GDP in 2023 (-0.2%). The recovery is expected to become more entrenched in 2024, with steady growth throughout the year, implying annual growth of 1.8%.

Banking Sector Improvements, Risks: NPLs in the banking sector have continued to decline at a steady pace, with the overall NPL ratio reaching 10.0% in 2Q22, down from 20.4% a year earlier. The decline has been driven by securitisation transactions and sales by the four systemic Greek banks, incentivised by HAPS. We expect the NPL ratio to decline to mid-single digits next year. Downside risks have increased as a result of the worsening economic and financial prospects, although government support to the most-affected borrowers, including through energy subsidies, should contain near-term asset quality pressures. Net credit flows to the private sector remain moderate, and negative to the household sector, despite strong residential real estate price dynamics in recent years.

Reforms, European Funds, Growth: The Greek authorities have undertaken a series of structural reforms across various sectors of the economy in the past years, (for example, investment licensing, property taxation, insolvency framework, labour markets), and also in the context of the implementation of the National Recovery and Resilience Plan, which envisages a spending envelope of around EUR31 billion (around 15% of forecast 2022 GDP). It is too early to assess the impact of these reforms on medium-term economic growth, but in our view this underlines a record of constructive relationship with European institutions. On August 20, Greece exited the European Commission's enhanced surveillance framework.

Inflationary Pressures, Current Account: Annual consumer price inflation on the harmonised HICP measure this year has risen from 5.5% in January to 11.6% in May, before edging down slightly. We expect HICP inflation to average 9.8% this year (revised up from 7.3% in July), and expect some persistence in prices next year, when the annual average inflation rate is expected to be 4.5% (revised up from 1.8%). Base effects will bring about a sharp decline in the inflation rate in 2024. High imported energy prices will lead to a deterioration in the current account deficit this year despite the positive impact of the tourist season on the services balance. In January-July the current account deficit was EUR9.7 billion, compared with EUR6.8billion a year earlier. For the whole year we still expect a deficit of 6.5% of GDP, higher than the 'BB' median estimate (4.0% deficit). The deficit will narrow to 3.5% of GDP by 2024.