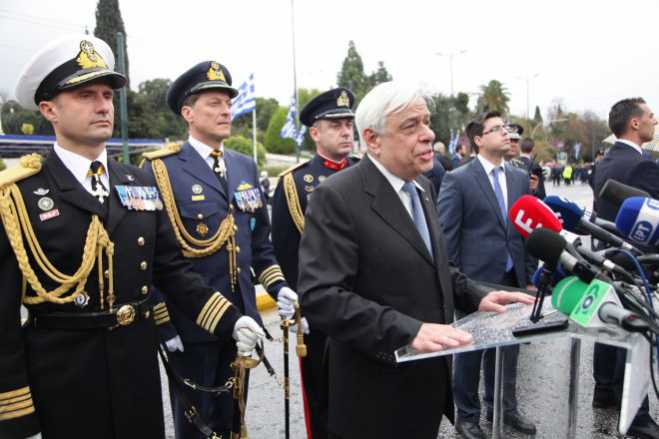 President Pavlopoulos underlined the need for a solid front of co-responsibility and coordination of our actions for the promotion of the country, the people and the nation's interests in his message for the Greek Independence Day on March 25.

"Greece is now a stable, credible power of peace and safety in the Balkans and in the wider region of the southeastern Mediterranean that totally and in practice respects the European and international law" he underlined adding that "it seeks the friendship and the cooperation with all its neighbours and in parallel wishes, as part of the European Union and of the eurozone, to actively participate in the building of the federation-type Europe on conditions of Representative Democracy and with respect to the rule of law and especially of the social rule of law" he added.

On the Cyprus issue, "which is of course and international and mostly a European issue, we seek its viable and fair resolution as soon as possible".
On the Greek-Turkish relations, he said that we seek for good neighbourly relations and relations of friendship and we support Turkey's European prospect but with the sincere respect, on Turkey part, to the international and the European law and of the European acquis.

He said that Greece favours North Macedonia's European prospect "on the condition the full and sincere respect to the whole of the European acquis and of the international law and especially to the Prespes Agreement which should be interpreted and applied without any trace of irredentism".

Referring to Albania, Pavlopoulos said that Greece is not against its European prospect but with prerequisite the full respect to the human rights and the total respect to the rule of law and to the international and European law.