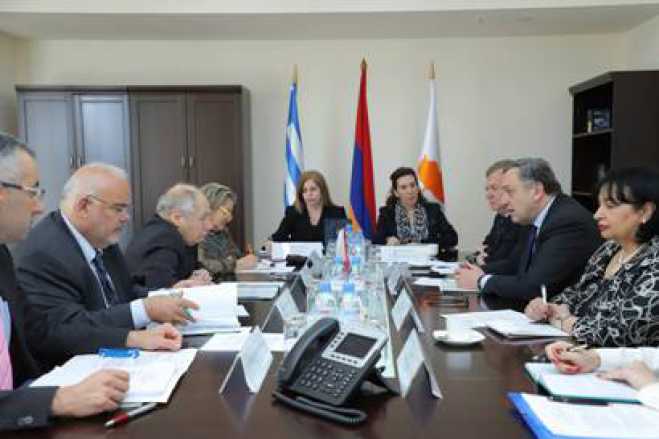 With the aim of promoting peace, security, stability and prosperity, the first tripartite Ministerial Meeting of Cyprus – Armenia – Greece, is held today in Nicosia through the enhanced political dialogue and the extended cooperation of the three countries, with the participation of the Foreign Minister of the Republic of Cyprus, Nikos Christodoulides, the Minister of Foreign Affairs of the Republic of Armenia Zohrab Mnatsakanyan and the Minister of Foreign Affairs of the Hellenic Republic, Giorgos Katrougalos.

According to an announcement by the Ministry of Foreign Affairs, during the first meeting at Ministerial level, the next steps will be identified and areas of common interest for further development of cooperation will be examined. The proceedings of the Tripartite Ministerial Meeting will be hosted at the Presidential Palace, with the participation of delegations from the Foreign Ministries of the three countries.

The three Ministers will make statements to the media at 14.15. The consultations will continue in the context of a working lunch. Earlier, Mr Mnatsakanyan and Mr Katrougalos, accompanied by Mr Christodoulides, will be admitted to a ceremonial meeting by the President of the Republic Nikos Anastasiades.

On the sidelines of the Trilateral Meeting, Mr. Christodoulides will hold separate meetings in the Ministry of Foreign Affairs with his Armenian counterpart and with the Greek Foreign Minister this morning. Moreover, on the occasion of his presence in Cyprus, the President of the House will have a meeting this morning with Armenian Foreign Minister Zohrab Mnatsakanyan and a delegation.