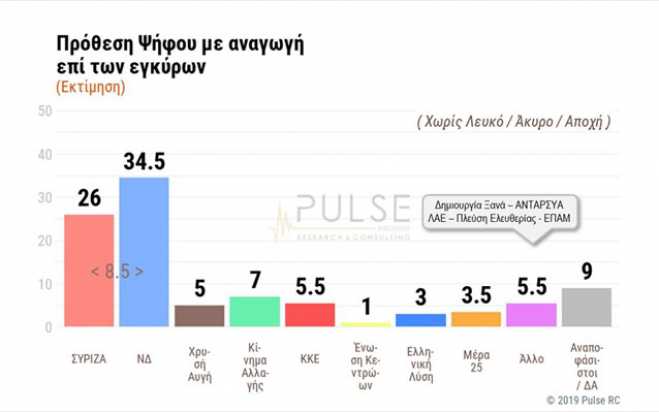 The latest results from a major opinion poll on Thursday showed a lead by center-right New Democracy (ND) party over leftist SYRIZA at 8.5 percentage points, the mediam difference from an extrapolation of valid answers of respondents on the question of which party they will vote for in the July 7 snap election.

The poll was conducted by the Pulse firm and presented on the primetime newscast of Athens-based Skai TV, one of the more vocal media critics of the outgoing Tsipras government.

Three other parties currently represented in Parliament are shown as re-entering, namely, the Kinima Allaghis formation that has mostly coalesced around once formidable PASOK party (between 5.6 to 8.4 percent); the Communist Party (4.3 to 6.7 percent); and ultra-nationalist Golden Dawn (3.8 to 6.2 percent).

At least two newcomers are vying for Parliament entry, which means a percentage of the general vote (of valid votes) exceeding 3 percent, namely, the national conservative Elliniki Lysi (Greek Solution) party, and Yanis Varoufakis' MeRA25. The former is assessed at exactly 3 percent, with MeRA25 at 3.5 percent.

All other parties together pooled 5.5 percent, while the number of respondents who said they are undecided or declined to vote reached 9.5 percent.

Asked which party they believe will win the upcoming election, regardless of their preference, a whopping 70 percent of respondents said ND; 19 percent opted for SYRIZA.

ND president Kyriakos Mitsotakis again outpaced the "neither" answer on the question of who is better suited to be prime minister. The pro-reform and pro-market Mitsotakis garnered 36 percent of respondents' preference; 32 percent picked "neither", and incumbent Prime Minister Alexis Tsipras was on the other side of "neither", with 26 percent.

Even more importantly, the latest results, if confirmed in the ballot box, point to a majority government for ND, i.e. 150+1 deputies in the 300-MP Parliament.