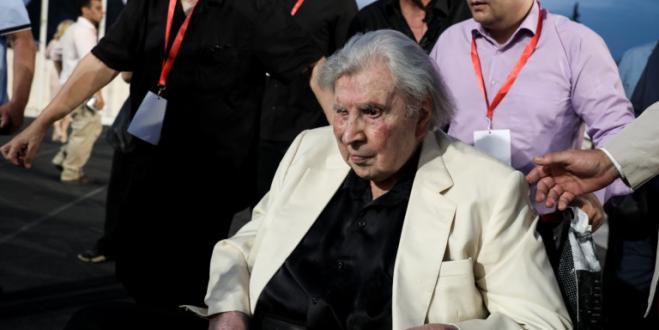 The name of Mikis Theodorakis will be named the 1st Primary School of Argostoli, at the initiative of the Vice-Regional Governor, Stavros Travlos.

This school is where the great composer was a student, who was informed of the decision and even decided to write a letter to thank those who made this decision. In a letter published by the newspaper, he wrote stories about his teachers, saying that if he was in good health, he would like to sit at his desk once more.

“I was moved to see Argostoli give my name to the elementary school. And of course I remember it like it was yesterday. The strict Mr. Stamatatos and our teacher Mrs. Elli. I was very naughty. So much so that Mr. Stamatatos was waiting for me at the door and with a stick, would strike my hands in advance. Why are you hitting me? I was asking him. And he shouted at me angrily: For what you are going to do!" He wrote first and continued:

“What did I see in 1949 in Makronisos [civil war camp for communists]? Mr. Stamatatos was walking between his two sons, who were my classmates. I went and kissed his hand and said: I forgive you for all the beatings you gave me. As you can see you were right. And I showed him the barbed wire. "

Theodorakis: I would like to sit at my desk again
Mr. Theodorakis then referred to experiences he had with his classmates, in which they had their names carved on a pine tree, as well as on the day they chose him to sing the hymn "Oh my sweet spring".

"I have put these hymns in the third part of my Third Concerto. And when I listen to the choirs and orchestras, my thinking goes back to my beloved school, when everything for us children was bright and beautiful. If I was well I would like to go back to my favorite desk. My dear children, I love and envy you and wish you health, kindness, and love. And for you to become better than us for the good of our country. "