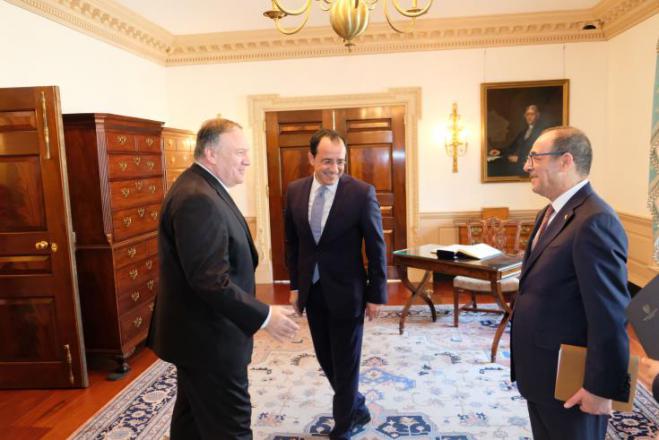 Minister of Foreign Affairs Nikos Christodoulides has expressed his satisfaction over the results of a meeting in Washington with US Secretary of State Mike Pompeo, noting that there was a clear commitment on both sides to strengthen cooperation in various sectors and that the US support towards resuming talks for a Cyprus settlement was important.

Speaking on the sidelines of a conference on Southern Europe and the Eastern Mediterranean, Christodoulides said the US commitment to participate in the trilateral formation between Cyprus, Greece and Israel, on energy and terrorism inter alia, was important, as was the US interest in the Eastern Mediterranean and their presence there, as well as cooperation with all states in the region on the basis of a positive agenda.

Christodoulides and Pompeo also exchanged views on developments in regional issues, such as Syria, Iran, Libya and Turkey.

Furthermore, Christodoulides was informed on issues concerning the Republic of Cyprus and meetings between the US and Turkey.

Regarding the Cyprus issue, Christodoulides said the US support towards efforts underway to resume negotiations was important. He also said the upcoming meeting in Berlin between the UN Secretary General and the leaders of the two communities would be decisive, and expressed hope for a positive outcome.

Christodoulides also pointed out that under no circumstances could the Turkish violations of Cyprus’ sovereign rights be accepted.

Replying to questions regarding the meeting between US President Donald Trump and Turkish President Recep Tayyip Erdogan, Christodoulides said the general impression was that Erdogan had prevailed, but pointed out that, taking into consideration discussions with US officials, there are many open issues in US-Turkish relations and others concerning regional issues, that are quite tricky.

Christodoulides also noted added that the sectors in which cooperation could be enhanced include security, economy, abolishing visas for Cypriot nationals visiting the US, and improving the double taxation avoidance agreement.

Meanwhile, in a statement after the meeting, State Department Spokesperson Morgan Ortagus said Pompeo underscored the strategic importance of the Eastern Mediterranean region and the US commitment to the US-Republic of Cyprus relationship.

“Secretary Pompeo and Foreign Minister Christodoulides welcomed the one-year anniversary of bilateral Statement of Intent to strengthen the security relationship, particularly in areas of shared interests in combatting terrorism, enhancing maritime and border security, and promoting regional stability”, she stated.

She added that “the Secretary of State reaffirmed the longstanding US policy on the right of the Republic of Cyprus to develop natural resources in its Exclusive Economic Zone and the continued US support to Cypriot-led, UN-facilitated efforts to reunify the island as a bizonal, bicommunal federation, for the benefit of all Cypriots.”