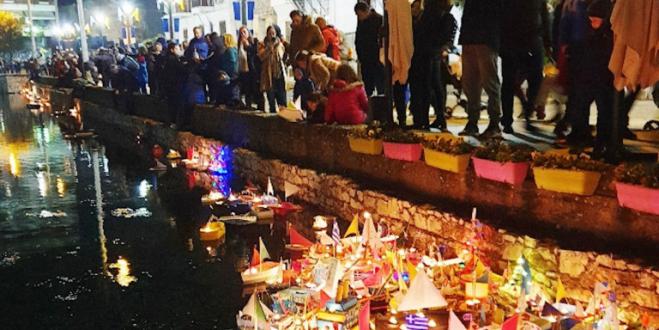 As dusk creeps over the city of Drama, on the eve of the feast day in honour of Saint Barbara (December 4), parents with their children rush to the lakes of the city to put their paper boats in the water.

The cold was biting, but the locals followed the tradition once more this year.

The is accompanied by legends and traditions that are lost in the depths of history and has its roots in the period of Turkish rule. Every year, on the eve of this great feast, the waters of the fountains and springs of St. Barbara form a small lake in a verdant area, in front of the church with the same name.

People walk to the lake and release hundreds of paper boats carrying dozens of wishes of the children who made them. They are the famous “boats of wishes” that will sail into the lake this evening creating a beautiful image full of nostalgia and emotion.
Kids of all ages created their own boats out of recycled materials with a great deal of attention and love.
They wrote their wishes on them, adorning them with colourful paintings, Greek flags and wooden constructions, put candles on them and released them into the lake for a journey full of hope and expectations. To fulfill their wishes, to maintain the custom, to keep the ancestral traditions alive. According to the folk legend, when Drama was conquered by the Turks in 1830, the old chapel of St. Barbara was demolished for the Muslim invaders to build a mosque in its place. The conquerors were forced to change their plans, however, as on the day of Saint Barbara’s celebration, the area was flooded with water, so the mosque was never built.

Since then Agia Varvara became the patron saint of Drama, and just across the lake, with the foundations of the old church in its bowels, the new church was erected dedicated to the Saint Agia that saved her chapel. Hundreds of people, young and old, with boats in hands, crossed the city to the fountains. There, amidst lush vegetation and the uniquely beautiful natural park, dominated by the old Spierer family’s tobacco warehouse, which has now been transformed into a charming hospitality venue, a spectacular event with the people at its core is set up. It is these people, who reverently continue to celebrate the customs, keeping the traditions alive, walking with their paper boats, who are hoping for a better future.