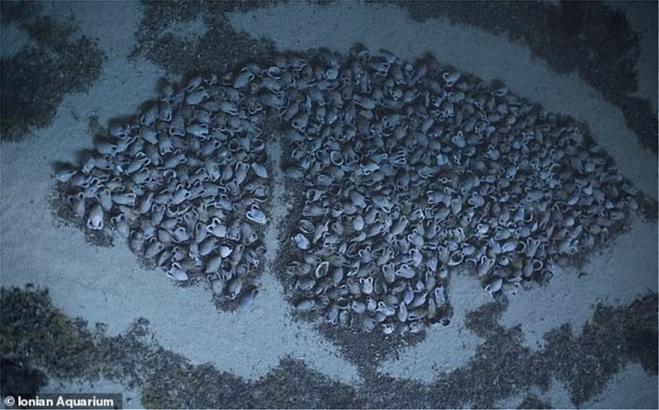 A Greek archaeological team has published photos of a trove of ancient artifacts brought to surface from an ancient Roman shipwreck off the port of Fiscardo in Kefalonia in the Journal of Archeological Science.

The impressive finds dating back to the Roman era during the time of Jesus Christ were found in a 33-meter-long shipwreck and could shed new light on the sailing routes pursued by Roman merchants in the Mediterranean.

The shipwreck was identified using sonar and includes thousands of amphorae and other ceramic jars and jags for the transportation of food and wine.

Experts examined the amphorae – tall jugs or jars with handles and narrow necks used by the Greeks and the Romans – and were able to determine the period in which they were used. Dr George Ferentinos of the University of Patras and a team of researchers dated the wreck to between the 1st century BC and the first century AD.

Dr Ferentinos said if the ship was removed from the floor of the Mediterranean in the future, researchers could get their hands on the hull which may hold more clues about its origin.

He said the Fiscardo is among the largest four shipwrecks dating from this period to have been found in the Med.

Dr Ferentinos said: “Its half-buried in the sediment, so we have high expectations that if we go to an excavation in the future, we will find part or the whole wooden hull.”
Dr Ferentinos is an expert in marine geology, underwater archaeology, oceanography and human prehistory.

The top of the vessel was found to be filled with amphorae.

Experts believe up to 6,000 amphorae were on board when he ship went down.