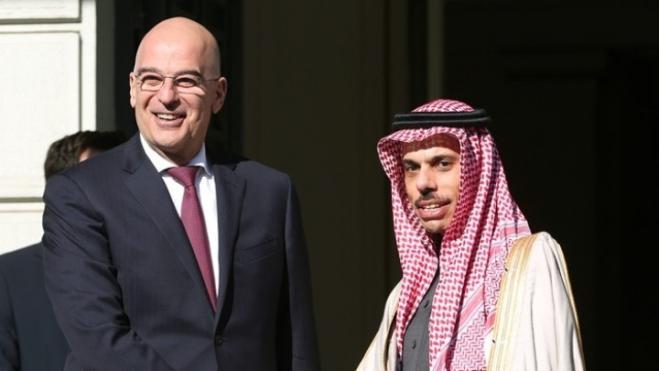 Greece and Saudi Arabia share the view that the Memoranda of Understanding signed between Turkey and Prime Minister of Libya's National Accord government Fayez Al-Sarraj are void and non-existent, Greek Foreign Minister Nikos Dendias said in Athens on Friday afternoon.

Following a meeting with his Saudi counterpart Prince Faisal bin Farhan Al Saud, Dendias added that Athens and Riyadh are working closely together towards regional stability.

"These accords are very dangerous both for Libya and the broader region," Dendias observed, adding that the Saudi minister's visit follows his own to Riyadh on December 17.

The destabilizing role of the Turkey-Tripoli MoUs is most obviously highlighted by the opinion of the German Federal Parliament's legal department, which termed them illegal, Dendias said. "It's not just about two illegal texts that are non-existent and harmful. They actually do create a destabilizing reality," he added.

When asked about Turkish provocations, Dendias said Greece is not a country that opposes Turkey, but a country that supports peace, stability and the implementation of international law. "We would like to have a neighbor who prospers and who shares the way we and Europe see things," he concluded.