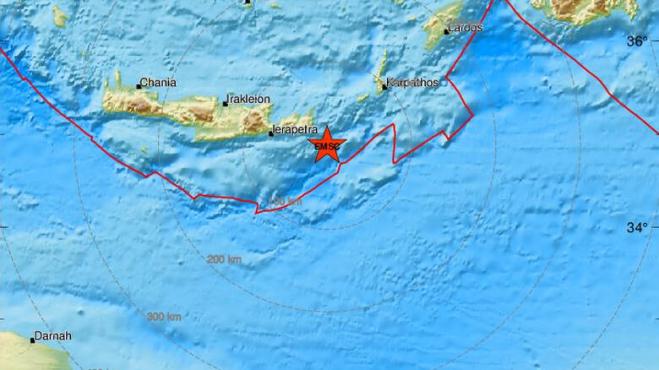 A few hours after the 4.7-magnitude Richter earthquake - noon Thursday - between Karditsa and Arta, seismographers at the Geodynamic Institute of Athens went to work again.

Around 4:24 Friday morning, an earthquake measuring 4 on the Richter scale was recorded in the maritime area between the islands of Crete and Kasos, 32 kilometers northeast of Zakros. The institute clarifies that the earthquake, which it described as "weak", was concentrated 392 kilometers southeast of Athens.

A new earthquake measuring 4.5 on the Richter scale followed, at 05:11 am, in the maritime area between the islands of Crete and Kassos, 33 kilometers east of Zakros. In this case too, the Geodynamic Institute of Athens spoke of a weak earthquake.

Just before 7:00 in the morning, another 3.9-magnitude earthquake was recorded in Achaia. The epicenter of the earthquake - which was felt in Achaia - was located 15 kilometers east-northeast of the city of Kalavryta, while its focal depth was 5 kilometers.

It should be noted that a smaller earthquake was recorded in the same area of ​​Achaia on Thursday evening.