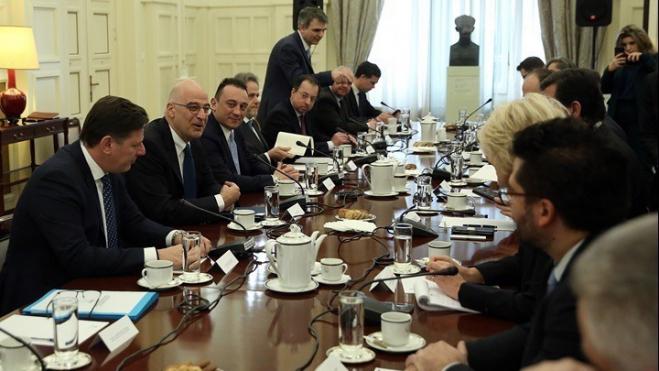 Foreign Affairs Minister Nikos Dendias briefed party representatives at the National Council of Foreign Policy (NCFP) and said, following the meeting on Wednesday, that there was a general consensus.

Parties were briefed about "the situation in the Southeast Mediterranean, Turkey's provocative actions, and about its historically and legally baseless claims," he said.

Despite Turkey's stance, he said, "Greece remains committed to keeping communication channels open," while he also briefed the parties about his contacts abroad concerning Greece's position on the memoranda signed by Turkey and the Tripoli government. "The visit of [Commander of the Libyan National Army Khalifa] Haftar in Athens proves Greece has a say in developments of the region," Dendias said, referring to the January visit.

He also spoke of initiatives Greece has undertaken to promote the accession talks of western Balkan countries in the EU, which include the EU Foreign Council meeting in Thessaloniki on February 24, and referred to the German reparations issue, saying that Greece has formally told Germany the issue is not over. "Our claims remain active and can be pursued, something we convey in every possible way," he said.

Statements by Movement for Change (KINAL) rep Andreas Loverdos, Greek Solution Antonis Mylonakis and MeRA25 Sofia Sakorafa related to the consensus on national issues, particularly Turkish aggression and the situation it has created, as Loverdos said.