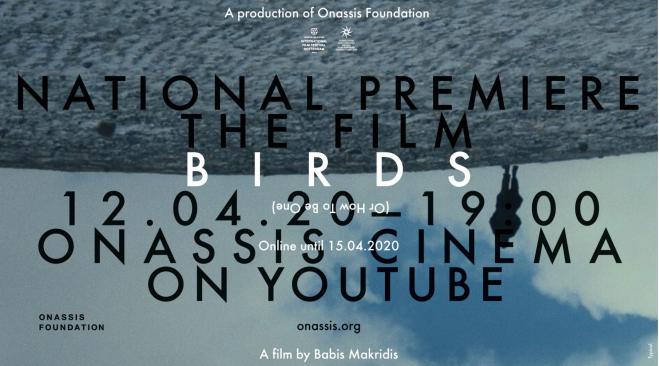 We may still be staying home, but the ONASSIS FOUNDATION is opening a window onto the world of cinema, bringing a film’s Greek premiere to our screens before it has even been released in theaters.

“Birds (Or How to Be One)” by Babis Makridis – the first of his films to be produced by the ONASSIS FOUNDATION – is hatching once more from its shell, following its international premiere at the International Film Festival Rotterdam, to take a flight of freedom as only birds know how. From April 12-15, the film is landing on the ONASSIS FOUNDATION Digital Channel, before being given clearance once more to fly off to festivals around the world.

“Birds (Or How to Be One)” is a hybrid film lying on the borders between documentary, fiction, and political fantasy. And given its free spirit, it seems fitting that it is the first Greek film to premiere on YouTube and not in theaters (which are its natural habitat). “Birds” by filmmaker Babis Makridis – who also directed “L” (Sundance Film Festival, 2012), and “Pity” (Sundance Film Festival, 2018 – Greek Film Academy Award for Best Film 2019) – is a film about falling and flying, about the human need to take flight, about the fear of heights, vertigo, utopia, freedom, the gods, and humankind.

The film draws inspiration from the archetypical myth that is Aristophanes’ “The Birds”, as well as Nikos Karathanos’ production of the play and its performers, filming them off stage, in real-life spaces and natural landscapes – from the lava fields of Iceland to the plateaus of Patagonia, and from Times Square to the pyramids of Egypt. Everything takes place in a universe of ever-shifting everyday life, in among PEOPLE from the theater, ornithologists, and sage hermits – all of whom dream of flying high.

An escape-manual of a film, one about bird watching, but where the birds are in fact PEOPLE.

Open a new window, catch the film’s premiere on the Onassis Foundation YouTube Channel and dream that you too can fly.