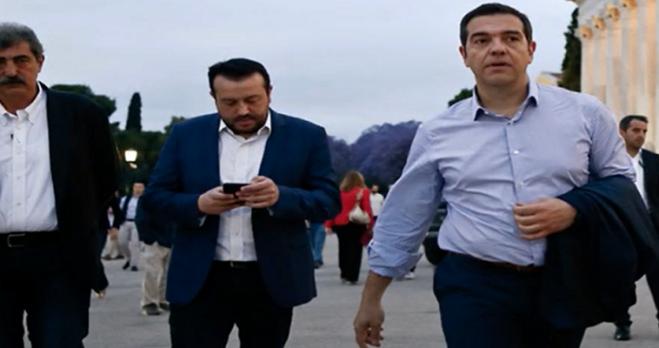 The ways and means used by SYRIZA to "strongarm the Houri family so wildly" for the sake of Christos Kalogritsas, in order to get him to create a TV channel of their choice, explains today the journalist George Papachristos, in "Nea", in the column of "Stigma".

Journalist George Papachristos in his article refers to the revelations of Kalogritsas about the pressures he underwent from the PM's office at Maximos Mansion and Nikos Pappas, in 2016, to fabricate invoices for the construction giant CCC, amounting to 3 million euros. The funds would be used to get a TV license. However, these funds eventually ended up in the newspaper Documento run by Costas Vaxevanis, as Mr. Kalogritsas said.

He hints that the then SYRIZA government sent tax police SDOE to the CCC in 2016, and imposed a fine of 2.5 million euros. Perhaps the financial control of the Houri family and their company CCC is linked to the loan to Kalogritsas, through the mediation of Tsipras and Pappas, writes George Papachristos, implying that the CCC was blackmailed by the then SYRIZA government. In fact, he writes the same about the channel owner Kontominas, a fact that the businessman himself complained about, as you will read below.

The journalist proceeds with further revelations:

"I was wondering yesterday, being naive, about how the duo that ruled SYRIZA and controlled all the dealings, namely Tsipras with Pappas, found the Lebanese-born Houris to lend to Mr. Christos Kalogritsas 3 million dollars so that he could take part in the competition for the TV licenses and to open the (coveted) SYRIZA channel. In other words, I wondered how it was possible that they bypassed the entire Greek vested ninterest system that at that time (in 2016) had fallen "on all fours" (as Kammenos used to say) and that they had "bitten" [ie extorted] the Houri family so fiercely for the sake of Mr. Christos. And for what reason?

And early yesterday afternoon, one of the most famous Greek businessmen and a friend of the Houri family called me to explain what  had transpired, since he knows it first hand: the young men of SYRIZA, when they took power, one of the first things they did was to impose tax and other checks on big business and rich people in the country. Using as their weapon, sometimes KEFOMEP (which checks on great wealth) and sometimes SDOE, and sometimes "pronouncements" by the Prosecution on money laundering, made all these people hostages of the pursuits [of SYRIZA]. And outspoken "helpers" of their efforts to impose a Latin American-style regime ...

In this context, it was ordered that SDOE audit CCC. Almost at the same time, in 2016, an audit was ordered for several members of the Houri family, even their relatives. I know the case of one of these relatives, who was fined 2.5 million euros. And I also know that the check into the company CCC was ordered despite the fact that it had no economic or other activity in Greece.

I would like to remind you that this family, of Palestinian origin, settled in Greece in the mid-1980s, under Andreas Papandreou, through the mediation of the Palestinian leader Yasser Arafat. And that the then government of Andreas, in order to grant them Greek passports, demanded that they transfer the headquarters of the construction giant represented by the company CCC.

I don't know - as I mentioned at the beginning, I'm naive. I will add I also have good faith. And of course I'm gullible. Otherwise, if I were any of the more sly players on the market, I would have linked the financial audit against Houri and their company CCC with the loans to Kalogritsa through the Tsipras-Pappas mediation.

And I would put the whole issue in its true dimensions: normal blackmail. Hence, I will address the Minister of Finance, Mr. Staikouras, in order to extract a serious answer: good morning, Minister. Have such checks been ordered and carried out on the Houri family and their company? When and why?

Also, since we are talking about everything now and the sweater of the gang that tried to turn the place into a Latin American "democracy" of the type of Colombia and Venezuela is being unravelled knot by knot, it is known that the duo of inconceivable achievers asked Kontominas to "lend" Alpha to Kalogritsas, but not the whole channel. They only asked for the news department (news and news related programs) while the entertainment side would stay under Kontominas, with the exception of Lazopoulos' show, which would be supervised by Kalogritsas. Kontominas had undergone a rigorous financial audit at the time, from which he had received a fine of about 80m euros. Given this and with the damoclean sword of the fine hanging over his head, he agreed to meet with Kalogritsas, but the meeting went awry. And as if that wasn't enough, a few days later Kontominas suddenly appeared on Menegaki's show and denounced the conspiracy set up by the gang in order for SYRIZA to acquire a channel ... "