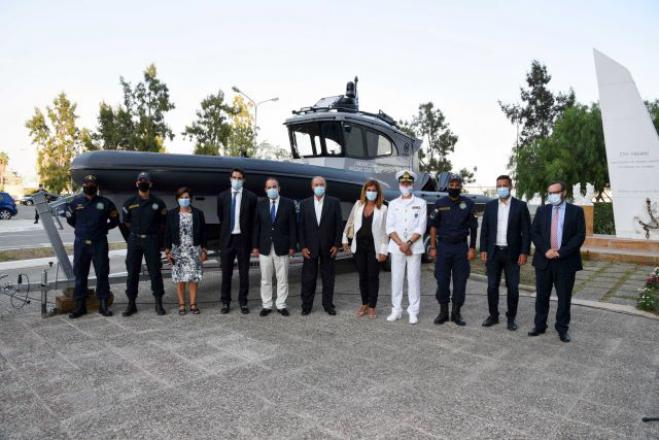 The third of the ten type Leiftur 1100 Cabin Patrol Rafnar boats from the donation of the social offer company "SYN-ENOSIS" of the Hellenic Shipowners Association and specifically of the Antonios and Ioannis Aggelikoussis Foundation, was received today during a special event the Hellenic Coast Guard Coast guard.

In a short greeting, the Minister of Shipping and Island Policy, Mr. Giannis Plakiotakis, after making a special reference to the Hellenic Shipowners' Association, which hastened to satisfy the request of the Prime Minister, Mr. Kyriakos Mitsotakis, to strengthen the Coast Guard, as well as to Ioannis. Angelikoussi for his selfless offer, as he characterized it, underlined that "the Greek shipowners, always in the difficult, always in the difficult conditions that the homeland was facing, show and continue showing a collective presence".

Addressing the crew of the Megisti Port Station who received the boat, he underlined: "Know that you are serving in an extremely sensitive area of ​​our country. "Kastellorizo ​​may be the tip of Greece, but at the same time it is the heart of Greece."

"Boat 1056 is available directly at the Port Station of Megisti in order to patrol the ends of our country and to strengthen the already increased surveillance measures of our maritime borders, in the particularly sensitive area of ​​the Eastern Aegean."