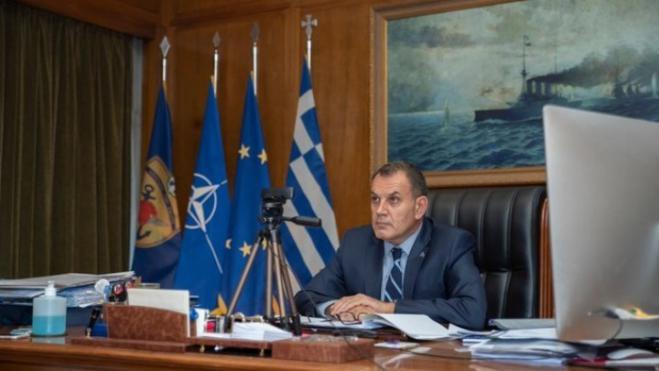 Nikos Panagiotopoulos expressed his belief that the country's Armed Forces are being re-equipped "within the framework of a large and organized plan", with the contribution of the staffs of the Army, Navy and Air Force.

"Our program," the minister told Alpha, "has the approval of the prime minister and is in progress. It is very ambitious and extends over time. It covers the entire length and breadth of the Armed Forces and the three branches. It includes not only the acquisition of new systems, such as Rafale aircraft, but also the upgrading of existing systems, which is also very important."

"Our grand plan of force structure," he continued, "predicts that in the long run 40 new fighter jets will be acquired. So far we have reached 18. Sooner or later the purchase of F-35s will be discussed. It is not of the present, but we will go to 5th generation aircraft and the main aircraft at such a level - within NATO - at the moment is the F-35. I also remind you that the program for the conversion of Greek F-16s into Vipers is evolving this year. This is the most modern version of F-16 in the world. In a few days, the first Greek F-16 Viper will fly to America. For the next seven years, we will develop, per year, from eight to twelve F-16s in Viper ".

For Turkey, the minister pointed out that "it understands that Greece is strengthening rapidly and catalytically. The acquisition of Rafale will tilt the scales of power towards the Greek side. It is not just the supply of airplanes. It is also the weapons they carry. Strategic weapons, not available to the other side. Weapons capable of striking key blows on the opposing side, if necessary. We all hope it will not be needed. "

Referring to the strengthening of the Armed Forces, he underlined that we are moving forward "with advanced weapons systems - with planes and weapons but also at the level of infrastructure -, strengthening our deterrent footprint. This goes hand in hand with diplomacy. "Because diplomacy cannot do without deterrence."

In particular, regarding the possibility of acquiring the French frigates Belharra, he stated that the decision "will be taken in the first half of this year".

As the minister said, "French Minister Florence Parley did not come bringing the proposal for the frigates yesterday in Athens. He assured, however, that this proposal is not late. At the moment we have the -happy, if you will- problem of having to choose between many proposals. We have five suggestions among others, but also the French that will come. We already have German, Spanish, American, Dutch, and British. We want a package proposal. In addition to the construction of the 4 ships -which will be new type frigates-, to ensure that some of them will be built in Greek shipyards with the involvement of the domestic industry. And until they are built - something that will take six to seven years - they will give us, those who will finally get the job, the so-called intermediate solution. That is, two used ships, but in good condition, possibly upgraded. We are waiting for concrete proposals ".