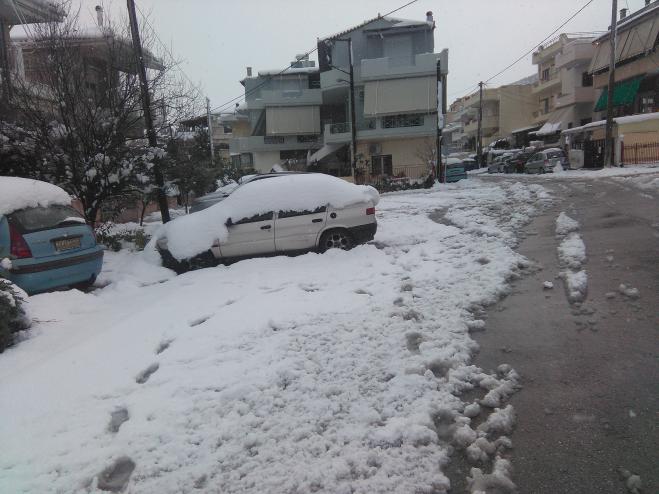 The progress in restoring power and the water supply to areas of Attica that were cut off due to the problems caused by the bad weather was examined at a technical meeting at the civil protection service on Wednesday, chaired by Civil Protection and Crisis Management Minister Nikos Hardalias.

After the meeting, Hardalias said that the overwhelming majority of the problems in the electricity network will have been repaired by the evening so that things can get back to normal, adding that restoring power was the top priority. He said that the network had suffered extensive damage as hundreds of trees felled by the snow downed power lines, especially in north and east Attica, adding that "Medea" brought one of the worst spells of bad weather and heavy snow in the last 20 years but was now receding, with the "struggle" now transferred to Crete.

Both the civil protection agency and the army was mobilised on Tuesday to assist the Hellenic Electricity Distribution Network Operator to reconnect dozens of areas in the capital left without power.

He also announced that the Athens-Lamia motorway was reopened at 4:00 on Wednesday.

"At the same time, all through the night in collaboration with EYDAP, all water processing units were restored and by 3:00 we had finalised the issues that had arisen. The big problem was the pumping station at Kiourka and the reservoir at Agios Stefanos. At this time, water supply has been restored and there are minor problems in Koukaki, Vari, Galatsi, Elefsina and Iraklio. By 15:00 in the afternoon, these will also be fixed."

Regarding the problems with power supply, Hardalias noted that this was the first time that there was a phenomenon that affected the entire country, as the bad weather was not restricted to Attica, and where the previous storm system Ianos had just four fronts in terms of the electricity network, Medea caused problems everywhere, which was why the government had enlisted the help of the army.

The meeting was attended by Civil Protection General Secretary Vassilis Papageorgiou, the general secretary for infrastructure, Giorgos Karagiannis, the head of the fire brigade Lieutenant General Stefanos Kolokouris, the head of operations at the Hellenic National Defence General Staff, Major General Ioannis Papanagnostou, Hellenic Police Major General Eleftherios Garilas, HEDNO CEO Anastasios Manos and the deputy head of the Athens water and sewage company EYDAP, Anastasios Tosios.
According to Manos, HEDNO was up against conditions not seen for decades, with problems up and down the country in all areas, with more than 600 teams and 1500 employees working to repair the damage at this time.

In Athens' northern suburbs alone, more than 400 people were working on a 24-hour basis, with additional reinforcements brought in from areas outside Athens, to repair 85 instances of damage to key supply lines in the last two days. Of these some 42-43 have been repaired, he added, with priority for the homes that had been without power for longest, in Dionysos, Agios Stefanos and Anoixi.

He reported some 800 fallen trees, saying this was tantamount to one tree falling every two minutes.