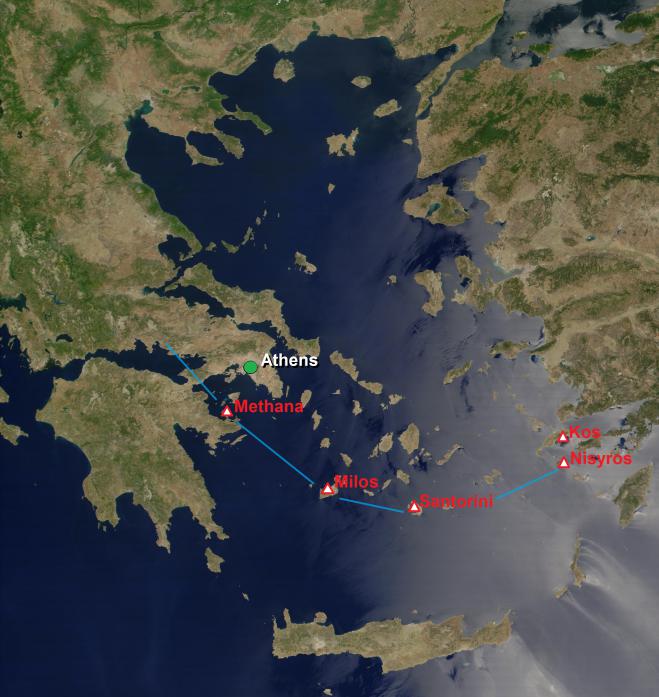 Few people know that there are 39 volcanoes in Greece, while five of them are still active. All these volcanic centers are located in an imaginary "arc" which starts from Corinth and ends in Nisyros.

But 5 of them are active. Let's get to know them.

Milos is almost entirely a volcanic island. The volcano of Fyriplaka, which has an impressive crater with a diameter of 1700 meters and a height of about 220 meters, is very well preserved and is located in the central and southern part of the island. Also the volcano of Trachilas, in the northwest part of the island, of which only a small part is preserved.

The volcano in Methana has been known since ancient times and its volcanic activity is known from the period 276 to 239 BC. from reports made by the well-known ancient historians Strabo, Pausanias, and Ovid. Near the village of Kameni Chora in Methana is the most famous crater of the 30 craters of the volcano of Methana. The volcano in Methana belongs to the volcanic arc in the southern Aegean was very active in ancient times and many eruptions occurred mainly during the period towards the end of the Tertiary period and during the Quaternary period. The inactive volcano in Methana manifested a very large eruption in the village of Kameni Chora during the period 277 to 240 BC. and is mentioned by the historians Pausanias and Strabo. The crater created after the big bang has a depth of about 50 meters and a diameter of 100 meters.

In the area of ​​Agioi Theodoroi on the border of Attica with Corinth, there is a volcano without a crater that even today maintains intense post-volcanic activity. Sousaki is the northern end of the volcanic "arc". It is located at an altitude of 180 meters above sea level and today, about 2.5 million years after its last eruption, it maintains intense activity as it releases tens of thousands of cubic meters of carbon dioxide, methane, and hydrogen sulfide into the atmosphere while the temperature on its slope it even reaches 42 degrees Celsius. At the mouths of the many galleries (natural and artificial) that exist in the area, there are often dead insects and birds, killed by poisonous gases. In the area of ​​the volcano there are two gorges which are surrounded by slopes with very impressive volcanic rocks while in them runs water that is fed by springs scattered among them.

The volcano of Nisyros is also one of the active volcanoes of our country. The volcano of Nisyros is located in the village of Nikeia and is the most important attraction of the island. It has a total of five craters with the largest "Stefanos", 260 meters in diameter and 30 meters deep. The five craters of the volcano form the plateau of Lakki, which was created by the eruption of the volcano in 1552. The last crater of the volcano, "Mikros Polyvotis", was created in 1887, when its last - so far - hydrothermal eruption occurred. The volcano of Nisyros is considered active and due to the easy access to its craters, it is visited every year by thousands of people but also by scientists. The only thing you need to keep in mind if you intend to go down to the bottom of the volcano is the closed shoe. The smell of sulfur may be strong (it smells like an egg cage) but it is a unique experience that every visitor to the island must experience.

For the last we left the famous volcano of Thira, that is Santorini. Santorini is one of the 5 volcanic centers that make up its southern volcanic arc. The image of the huge volcanic rocks that are full of all-white houses and churches is typical. This "layer" on the red volcanic rock creates a visual image unique on Earth.