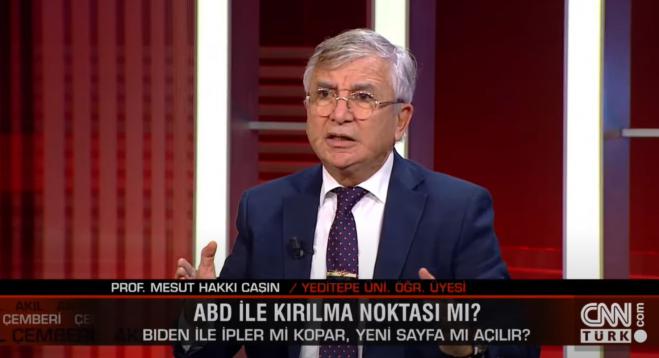 An advisor to Turkey’s President Recep Tayyip Erdogan threatened neighbouring Greece as the Turkish leader meets with his Greek counterpart in Brussels, the Greek City Times reported on Monday.

Mesut Hakkı Caşın, a foreign policy aide for Erdogan, said that Turkey was “fully prepared” and “waiting in the trenches” ahead of any potential conflict with Greece during an appearance on CNN Türk. The firebrand advisor invoked the 1922 Great Fire of Smyrna, modern day Izmir, before openly taunting the Greeks for the tragic event.

“They were all drowned in the sea,” he said. “They must never forget this. The Greeks call this as the disaster of the century. You can’t beat me again.”

The fire’s cause is still disputed but the event is a particularly sensitive topic for many in Greece because of the 100,000 Greeks who died during this period during the Greco-Turkish War of 1922. Another 400,000 Greeks were driven to the edge of the Aegean Sea, which precipitated the population exchanges of the Treaty of Lausanne in 1923 between Greece and the newly proclaimed Turkish Republic.

Casin also targeted the United States in his on-air tirade for their growing partnership with Greece in recent years.

We can also close our [military] bases [to US troops]. Let the US take its radar [NATO radar base in Turkey’s Kürecik] away. The radar does not work for us anyway,” said Casin.

As Casin made his remarks, President Erdogan met with both U.S President Joe Biden and Greece’s Prime Minister Kyriakos Mitsotakis.

Following his meeting with Biden, Erdogan described it as a “very useful and sincere” encounter and that he felt his American counterpart wanted a “productive partnership” with Turkey.

Erdogan sounded a similarly positive tone about his meeting with Mitsotakis. The Turkish leader described the re-establishment of channels of communications with Greece as beneficial to “stability and prosperity of our region.”