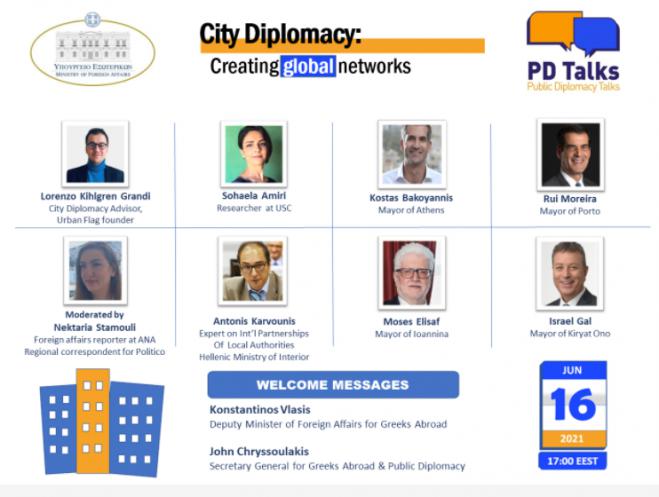 In the first part of the discussion Dr. Lorenzo Kihlgren Grandi, founder of Urban Flag, and lecturer at Sciences Po Paris, École Polytechnique and Columbia University, Ms Sohaela Amiri, researcher at the University of Southern California and Dr. Antonios Karvounis, Head of the Interministerial Committee for the International Partnerships of Local Government, will focus on the new globalized role of the cities with examples from Greece and abroad. A discussion on cooperation and expectations regarding City Diplomacy will follow between the Mayor of Athens, Mr. Kostas Bakoyannis and the Mayor of Porto, Mr. Rui Moreira, as well as between the Mayor of Ioannina, Mr. Moses Elisaf and the Mayor of Kiryat Ono, Mr. Israel Gal.

The discussion will be moderated by Ms Nektaria Stamouli, foreign affairs reporter at Athens News Agency and regional correspondent for Politico.

In an international environment, where cities focus their efforts to emerge as key actors, city diplomacy is becoming more and more relevant. New technologies foster the creation of active city networks, in order to address common challenges and achieve mutual goals. Global challenges, such as climate change and COVID-19 pandemic can be effectively tackled at a local level as well. The debate on the cities’ role in a multilateral environment is becoming indispensable.

The “Public Diplomacy Talks (PD Talks)” constitutes an annual Forum inaugurated in 2020 by the General Secretariat for Greeks Abroad and Public Diplomacy of the Ministry of Foreign Affairs, in order to provide a platform for a vibrant and fruitful exchange of views and best practices on Public Diplomacy.

Register at: This email address is being protected from spambots. You need JavaScript enabled to view it. (deadline June 15)

Dr. Lorenzo Kihlgren Grandi is the founder and chair of Urban Flag and a lecturer in City Diplomacy at Sciences Po Paris, École Polytechnique, and Columbia University. His primary expertise and research interests are in the international action of cities and their multilateral response to global challenges such as sustainable development, intercultural dialogue, and digital transition. Lorenzo gained extensive practical experience in these areas, serving as an officer of the City of Milan’s International Relations Department and as an advisor and content strategist to the International Association of Francophone Mayors (AIMF). He is currently an advisor on city diplomacy strategies to numerous municipalities, city networks, and international organizations. He is the author of “City Diplomacy” (Palgrave Macmillan, 2020), the first global handbook of such a field. A member of the United Nations Alliance of Civilizations Fellowship Program, Lorenzo holds a dual Ph.D. in Political Theory from the École des Hautes Études en Sciences Sociale (EHESS) in Paris and the Libera Università Internazionale degli Studi Sociali “Guido Carli” (LUISS) in Rome.

Sohaela Amiri is Research Associate at the USC Center on Public Diplomacy (CPD) and PRGS Fellow at the RAND Corporation. Her recent research has focused on U.S. City Diplomacy, influence dynamics in international affairs, and impact assessment for public diplomacy programs.