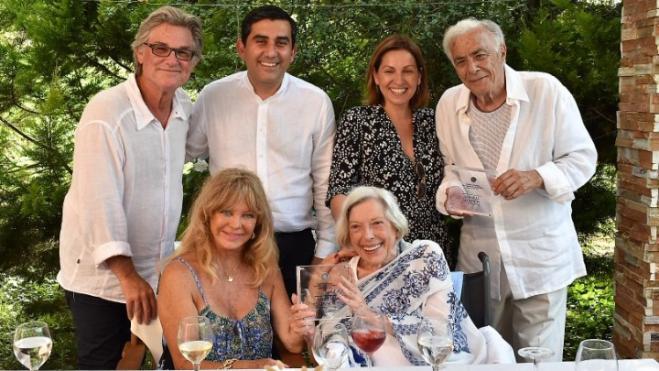 The island of Skiathos on Sunday extended honorary citizenship to Hollywood costume director and film producer Anthea Sylbert and her partner, author and actor Richard Romanus, in a simple ceremony that was also attended by acting stars Goldie Hawn and Kurt Russell, who are close friends of the couple.

The pair have been living permanently on the island for several years, while the ceremony was held at their home due to health reasons which prevent them from moving about.
Skiathos Mayor Thodoris Tzoumas commented that it was a great honour for a place to be chosen as the permanent home of people that not only fell in love with it but showed a genuine interest in learning about its history, its culture and especially its people, and in becoming a part of its contemporary history, having left Hollywood behind for the island.

Richard Romanus has a degree in philosophy from Xavier University and, after studying law and music, studied acting at the famous Actor's Studio founded by Elia Kazan. He acted in countless films and television series and has co-written screenplays and produced films with Sylbert, while in 1999 they were nominated for best screenplay in the United States. Since 2000 he has turned to writing books about Skiathos and has published four books in English.
Anthea Sylbert studied history of art and was one of Hollywood's top costume designers, having worked on 21 films and received two Oscar nominations and an EMMY for her work with some of Hollywood's greatest directors. Among others, she is a fervent supporter of the return of the Parthenon Marbles to Greece.

The couple are also among the warmest supporters of the island of Skiathos and have helped promote both Greece and the island internationally through their work.