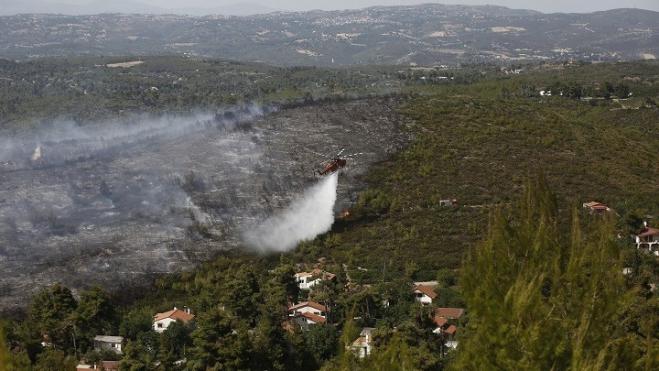 The fire that started earlier on Tuesday at Stamata, northeastern Attica, seems to be subsiding, although many scattered fire pockets are still active, said Deputy Minister for Civil Protection & Crisis Management Nikos Hardalias at a special live briefing on Tuesday evening.

The fire first broke out near Stamata cemetery, but high winds registering up to 6-7 in the Beaufort scale propelled the blaze further across to the area of Dionyssos, he noted.

Local homes and communities were threatened as the fire moved along, and residents were sent 2 text messages with personal and home safety instructions.

A force of 310 firefighters, 110 fire engines, 12 helicopters, 9 aircraft including a Berier-200 and several volunteer organizations are all still operating in the area.

Four suspects have so far been detained on suspicion of arson, Hardalias underlined.

Also speaking at the briefing, Citizen Protection Minister Michalis Chrysochoidis said that all operational forces were mobilized immediately to extinguish the fire.

The Fire Brigade is looking into the causes of the fire, and will soon reach their conclusions, he noted.