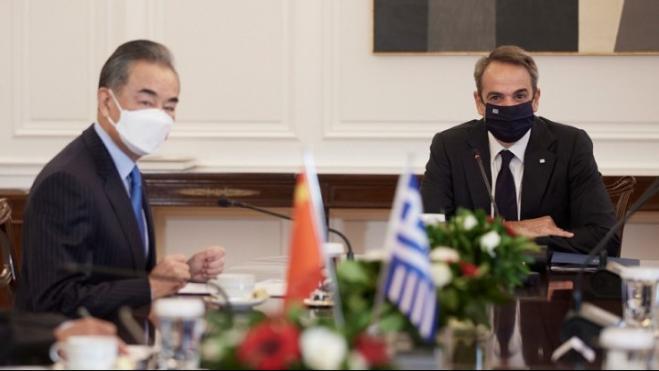 Prime Minister Kyriakos Mitsotakis and the Foreign Minister of the People's Republic of China Wang Yi conducted a review of bilateral relations between Greece and China and international affairs during their meeting at the Maximos Mansion on Wednesday.

They also examined the prospects for further developing economic and investment relations after the Greek Parliament ratified the agreement for the concession of an additional 16 pct of the shares in the Piraeus Port Authority to COSCO Shipping.
In addition, they examined cultural ties in the framework of the Greece-China Year of Culture and Tourism 2021-22.

"We welcome you to Athens and, taking into account the fact that 2022 is an Olympic Games year, we wish you every success in their organisation. In September the inauguration of the Greece-China Year of Culture and Tourism 2021-22 took place in the Ancient Agora, which confirms the bonds of friendship between our states. We hope that in this area also we will further strengthen our cooperation," Mitsotakis said.

The Chinese minister, on his part, noted that bilateral relations were progressing smoothly and referred to a special bond between the Greek and Chinese people, adding that the purpose of his visit was to discuss the future growth of Greek-Chinese bilateral ties.