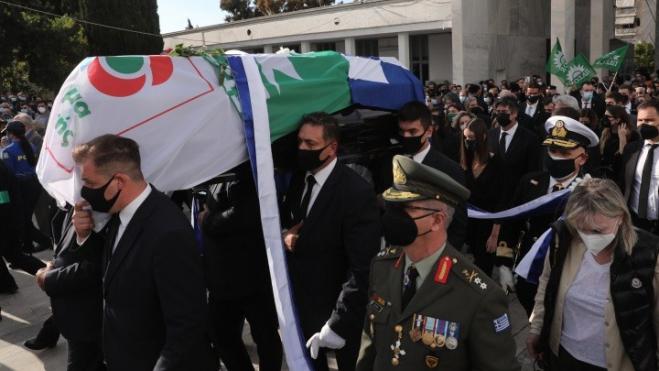 Movement for Change (KINAL) leader Fofi Gennimata, 57, was laid to rest at the First Cemetery of Athens on Wednesday following a political career that began with her assisting her father as minister of PASOK to acquiring the profile of a politician who could keep her party together and was not tainted by any scandal.

Gennimata was buried at her father's grave site, as crowds laid flowers and called out "Athanati" (Immortal) for a politician who weathered political and health storms alike with great dignity and courage, which were qualities eulogized in the days following her death and at her funeral service.

Earlier on Wednesday, she lay in state at a chapel at the Athens Cathedral (Mitropoli) in a casket draped by the Greek flag and the banners of PASOK and KINAL. Her body was then transferred to the cathedral for a funeral service attended by President of the Republic Katerina Sakellaropoulou, Prime Minister Kyriakos Mitsotakis, the Parliament president, the cabinet, and party leaders, among others.

As her funeral cortege left the cathedral, crowds lining the streets leading to the cemetery clapped in honor. The procession stopped before the Tomb of the Unknown Soldier at Syntagma Square for a few minutes before moving on to her final resting place, where she was interred with honors of an active minister. An honorary guard of the Armed Forces stood by at the cathedral, and fired shots at the cemetery, where she was buried under City of Athens expense.

Gennimata, who had survived cancer before, was admitted to hospital on October 12 with a recurrence of her illness. She died on October 25 in a sudden turn for the worse, shocking the political world.