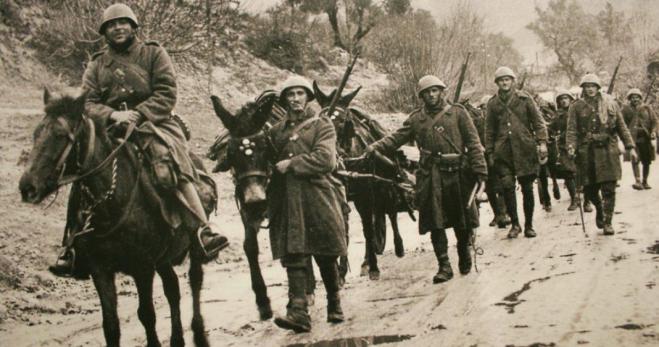 The nightmare of the war began when in the early morning hours of October 28, 1940, the Italian Ambassador to Athens, Emanuele Grazi, personally handed over an ultimatum to the Greek dictator Ioannis Metaxas, at his home in Kifissia.

It demanded the free passage of the Italian army from the Greek-Albanian border, in order to then occupy some strategic points of the Greek Kingdom (ports, airports, etc.), for the needs of supplies and other facilities for its subsequent advance to Africa.

The answer was "NO" and so Italian military forces began military operations to invade Greece through the Greek-Albanian border.

Grazi himself describes the scene in his memoirs, published in 1945:

"As soon as we sat down, I told him that my government had instructed me to make a very urgent announcement and without further ado I gave him the text. Metaxas started reading it. The hands holding the paper trembled slightly, and through the glasses I could see his eyes watering as usual when he was excited. When he had finished reading, he looked me in the face and said in a sad but steady voice, "Alors, c'est la guerre!" (so we have a war).

I replied that the Italian government hoped that the Greek government would accept its demands and allow the Italian troops to pass freely, which would begin their movements at 6 in the morning. Metaxas then asked me if I could think that even if he intended to surrender, it would be possible for him to receive the king's orders within three hours and give the necessary instructions for the free passage of the Italian troops. "

Metaxas at that time had expressed the Greek popular sentiment, the denial of submission, and this denial passed to the then Greek press with the word "NO".

It is noted that the word "NO" was presented for the first time as a title in the main article of the newspaper Elliniko Mellon by N. P. Efstratios on October 30, 1940.

It was then adopted as a slogan, by other newspapers, and for the following occasions, such as the cover of the newspaper Vradyni, on April 6, 1941 on the occasion of the German invasion of Greece.

The anniversary of "NO" was celebrated for the first time during the years of Occupation. The first celebration took place in the main building and in the courtyard of the University of Athens on October 28, 1941. On the second anniversary (28/10/1942), the celebration took place in Syntagma Square on the initiative of the EPON and PEAN organizations.

Events and demonstrations that day took place in other cities as well. In Piraeus, rallies were held, someone climbed on a chair, gave a short speech, and then disbanded, in order to avoid the intervention of the carabinieri. The anniversary was officially celebrated for the first time on October 28, 1944 with a parade in front of Prime Minister Georgios Papandreou.

The Church of Greece decided, in 1952, to move the feast of Agia Skepi from October 1 to October 28, on the grounds that the Virgin Mary helped the Greek Army in the war in Albania.

Every year on this day in Thessaloniki, the official celebration with all brilliance, in the presence of the President of the Republic and other officials, with a large military parade, which coincides with the celebration of the liberation of the city during the First Balkan War and his memory patron saint of Agios Dimitrios on October 26. In Athens and other cities, student parades take place, with the Greek flag adorning public and private buildings.