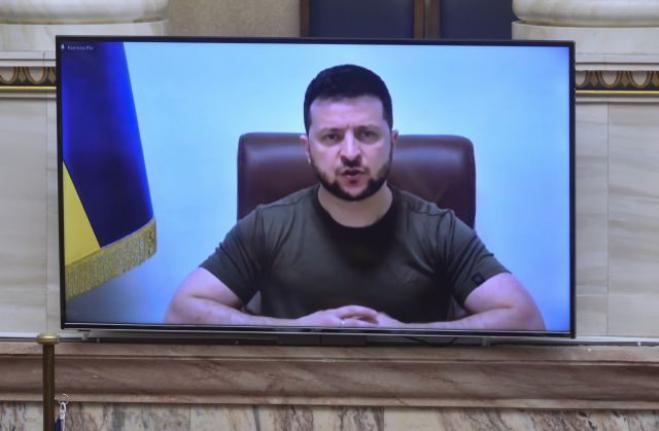 The President of Ukraine Volodymyr Zelensky addressed the Greek Parliament in the presence of the President of the Republic Katerina Sakellaropoulou.

The Ukrainian President was introduced by the Speaker of Parliament, Costas Tassoulas. He described today's meeting, which is dedicated to the Ukrainian people, as historically significant. A people who are fighting heroically against the barbaric Russian invasion that is becoming more and more inhuman. He reminded that Greece from the first moment condemned the Russian invasion.

"The will for further assistance to Ukraine is strong. We are connected by historical ties, he underlined while making special reference to the Greek community of Mariupol. Mr. Tassoulas also referred to the history of Greece and Cyprus that experienced the Turkish invasion.

"Greece, which is celebrating its 200th anniversary and 81 years ago faced the invasion of the Third Reich, today declares its support until your final victory", Mr. Tassoulas concluded his address.

Volodymyr Zelensky began his speech from the tormented Mariupol, as he called it. What is happening there has not happened since the Second World War. 100,000 people remain in Mariupol but no building has been left standing. We have been seeing the "deeds" of the Russian troops for over a month now.

The peaceful city of Mariupol is experiencing the violence of Russian troops. It was for centuries the cradle of the Greek community that lived peacefully with the rest of the inhabitants. The coexistence of our communities is a given. Mr. Zelensky spoke about Ukraine's ties with Greece, as he said his country was Christianized by the Greeks.

The President of Ukraine referred to the slogan of the Greeks "Freedom or death," 200 years ago, and said that this is the message for Ukraine today. He made great reference to the blows suffered by Mariupol and Odessa while he spoke about the need to re-establish a Friendly Society that will help his country.

A video of a Ukrainian soldier of Greek origin, from the Azov Battalion, participating in the defense of Mariupol by the Russian Nazis was then shown. "90% of Mariupol has been destroyed by the Russian Nazis. Compatriots we have a city where thousands live and die. Please help us." The same message was sent by another Greek-Ukrainian soldier from Mariupol who asked his compatriots to help them.

Volodymyr Zelensky spoke about the proclivity of Russia, which concerns not only Ukraine but the whole of Europe. "We have to close the door on Russian banks. No Russian ship should approach European ports. No acceptance of Russian tankers. Ukraine needs sanctions but it also needs weapons.

Concluding his speech, President Zelensky was applauded by MPs. In fact, the deputies of the ruling party gave him a standing ovation.