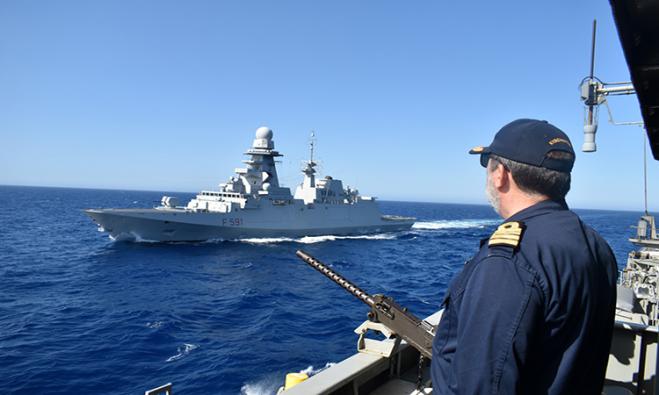 The Greek Armed Forces General Staff is on high alert after the acquisition by Turkey of a fourth new generation drilling rig, which it intends to send, as Ankara previously announced, in a mission in the Eastern Mediterranean in the summer.

Officials in Athens are worried that Turkey may launch a new series of provocations at sea. After all, in recent weeks Ankara's behavior has been extremely delinquent as it steadily escalates its provocative actions by sending armed fighter jets and spy drones over the Aegean.

The continuous overflights over Greek islands, the engagements with Greek F-16s but also the obsession with the tactic of maximalist rhetoric, through announcements that Greece commits violations in the Aegean with Rafale fighters, intensify the degree of readiness of Athens' deterrent capacity.

The new Turkish 7th generation drilling rig acquired by Ankara, has capabilities for offshore drilling at very high pressures, at great depths of 12,000 - 12,500 meters and will be named Alparslan (probably after the name of the second Sultan of the Seljuk Empire) and as the Turkish press points, it is expected to arrive in Turkey on May 19 at the port of Tasucu in Mersin, in the Eastern Mediterranean.

As the NEA newspaper weekend edition notes, "it is obvious that Ankara and Turkish President Recep Tayyip Erdogan are trying to demonstrate Turkey's power and capabilities in the energy field on a date that has high symbolism for both Turkey and Greece. Besides, they have done it a few times.May 19 is the day of remembrance of the Pontian Genocide committed by the Turks, while on the same day Turkey celebrates the day of remembrance of Kemal Ataturk."

The movements of Ankara are constantly being studied by the Greek officials, and in the equation that is formed on the chessboard the possibility of provocation against Greece or Cyprus, assumes the character of a fixed and not variable parameter.

At least, this scenario is being studied very seriously, as well as the answer that will be given.

What about 40 airspace violations?

It is said that a few days ago, when the US Secretary of Defense, Lloyd Austin, called his Greek counterpart to informally discuss the possibility of additional military assistance to Ukraine, he received the answer from Nikos Panayotopoulos, that with 40 overflights of Turkish aircraft over islands, such a move would create a rift in the country's defense capability, which is oriented towards defending national sovereignty.

Escalation of Turkish challenges: Three drone overflights on the islet of Panagia in mid-July

A few days ago, the CEO of the Turkish state oil company TPAO, Melih Han Bilgin, said that the 4th drilling rig will be in the port of Tasucu for two months and then, around mid-July, it will be ready for exploration in the area. of the Eastern Mediterranean. It should be noted that Ankara's initial aim was to send the 4th drilling rig to the Black Sea, ie to areas where the Turks have already announced that they have found gas fields. But now they seem to be changing the design.

The fact is, however, that some of Athens' moves, mainly its close cooperation with the United States, energy initiatives and the upgrading of its energy role, are exacerbating frustration in Ankara.

Which, sees itself in the wider region as a regional power and in energy. That is why all Turkish ministers reiterate the phrase that Ankara "will not allow any movement in the field of energy and hydrocarbons in the region that will not include Turkey". In addition, it should not be forgotten that the Yavuz and Fatih drilling rigs have carried out illegal operations in areas of the Cyprus EEZ.

Therefore, in the Ministries of Defense and Foreign Affairs, there is a relative preparation but also vigilance for any eventuality.