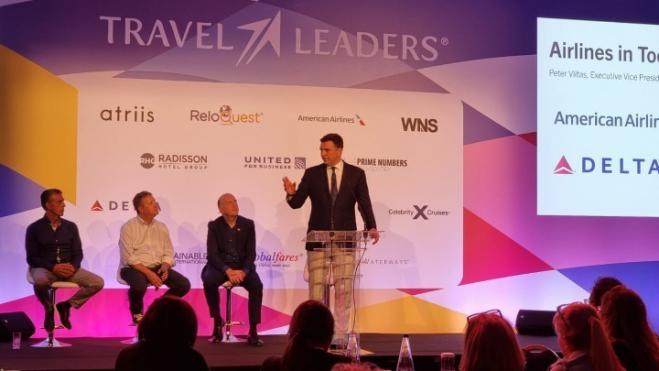 The positive messages for tourism in Greece from the US market were mentioned by the representatives of the three largest American airlines at the "Travel Leaders" economic-development forum organised in Lagonisi, Attica with the participation of the major tour operators from all over the world.

Tourism Minister Vassilis Kikilias underlined the deepening of the strategic relationship developed with the USA throughout the previous period, the culmination of which was - as he said - the establishment of nine direct flights a day between Greece and the largest airports in America, a number corresponding to 63 flights per week.

"We have never had 500,000 travellers directly from America at 'Eleftherios Venizelos' - coming from Atlanta, Chicago, New York, Boston, Washington and Philadelphia with all three American companies - with the first flight having started as early as 7 March, earlier than any other year. Of course, all this did not happen by accident. Nor are these just facts and figures. It is the great added value of our tourism product - the result of collective, hard and methodical work - that translates into income for the Greek economy and the average Greek family, Kikilias said.

Kikilias also underlined that the effort of the tourism ministry does not stop here, as the goal now is to increase direct flights from the USA to Greece and to extend these flight schedules beyond the summer months. "Our main priority, already from the beginning of this year's very successful summer season, is to extend the tourist season in our country. In June alone, visitor arrivals from the other side of the Atlantic were 50% higher than in 2019. And I am especially happy that our efforts are paying off, as I am informed that most companies have already extended their itineraries for the next months," he stated.

On the sidelines of the forum, Kikilias had private contacts with the representatives of the three US airlines (American Airlines, Delta Airlines and United Airlines), who noted that, this year, Greece - and especially Athens - emerged as one of the most successful international destinations they operate. For this reason, as the US airline representatives underlined to Kikilias, an extension of their operation in Greece for the autumn-winter period as well is already under discussion.

According to information obtained by the Athens-Macedonian News Agency (ANA), Delta, following the launch in 2022 of a direct Athens-Boston flight for the first time after 25 years, has already scheduled flights to Greece until January 10, 2023, on the Nea York-Athens route, thus also covering the Christmas-New Year holidays. This fact takes on particular importance, as while based on the company's initial planning, the direct routes New York-Athens would extend until October at the latest, Delta is now essentially extending the time of its operation in Greece into a 10-month period.