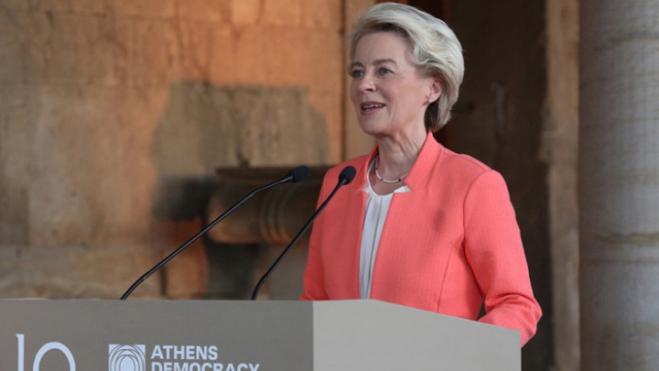 Focusing heavily on the Russian war in Ukraine, she noted that "it is the duty of our generation to stand by Ukraine as it struggles to determine its future," while "we will help it politically, economically and militarily."

The president also called for the unity and determination of European citizens, saying: "We are all being tested today by Russia's war against Ukraine and its blackmailing on energy, but we must stay determined and united. Each of us is part of the resistance, and the protection of our future."

Referring to a notion of ancient Athenian democracy, she pointed out that "the idea that we are all equal before the law, the idea that freedom of speech is a fundamental right, is the immortal gift that Greece gave the world."

Leyen also highlighted the weaknesses that still exist within the EU, saying that although "Europe was built on the promise of unity and diversity, racism and anti-Semitism are yet to be eradicated. Not all minorities are respected."

She also made special mention of the lack of respect for the rule of law and the independence of the judiciary, and she aired concerns about corruption: "All this is against our values and our democracy."

Mentioning new levels of threat, such as disinformation, meddling in national elections and also cyber attacks, she stressed that "we need to shield our values better."

In response to energy dependency on China and Russia that "undermine the national sovereignty of states," she noted that "we are planning the new European investment program in energy and digitalization," noting that "our digital investments protect individual rights."

Finally, she spoke of future generations "to which democracy belongs," and which "we must place at the center of our actions, such as when dealing with climate change."