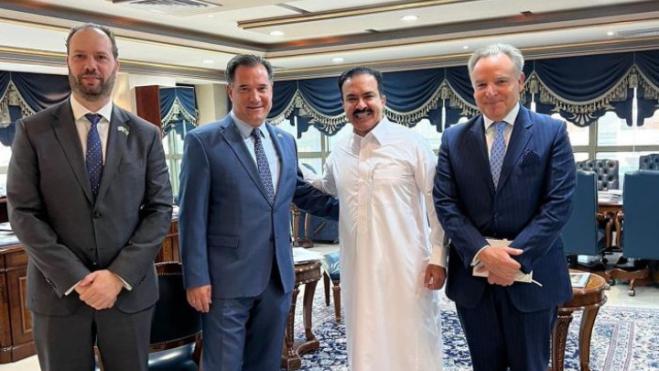 Further enhancing economic relations between Greece and Saudi Arabia was at the center of meetings held by Greek Development & Investments Minister Adonis Georgiadis and state officials in Riyadh on Monday.

The Greek ministry tweeted about the meeting of Georgiadis with his Saudi counterpart Khalid Al Falih and the Chairman of the Council of Saudi Chambers of Commerce & Industry Ajlan Al Ajlan. This meeting was also attended by the Greek ministry's Secretary General for Public & Private Partenships (PPP) Orestis Kavalakis.

In his own tweet, Georgiadis said that cooperation with his Saudi counterpart Khalid Al Falih "is exemplary, and produces results!"

Georgiadis also posted about his meeting with Swaiket Group CEO Abdullah Swaiker, who "has chosen Crete for a brilliant investment in tourism at Triopetra, which is moving fast," he noted.
Finally, the Greek minister tweeted about visiting the offices of multinational enterprise Olayan Group: "The Olayan family has been investing in Greece for 50 years," he noted.