How is it possible to become famous as an unknown celebrity? TAKI 183 may have the answer to this question.

Yonkers, New York - His name was known to the whole city, but his face and identity was a secret that only few people had the privilege to know.

It was in the beginning of the 1970s. During the years of urban decay and high crime, a Greek-American teenager was roaming the narrow dark streets and the gleaming avenues of New York City with a mission. While he was trying to write his name everywhere, TAKI was unaware that he was slowly carving with his marker a personal legend.

The years past, the graffiti movement spread around the world, but Taki's name and story was not forgotten.

This is the tale of a young teenager, who became against his will the "Father of Graffiti." Forty-four years later, TAKI recounted his personal story and thoughts about graffiti to New Greek TV.

Taki, do you want to be the "Father of Graffiti?

I don't really want to be the father of graffiti because it is not a noble child to have. As far as being the father of graffiti, I think they give me that name because it is a very basic graffiti. It is not unique, it stood out from other similar graffiti and that is the only reason. And as I said the media prompted up. They made the TAKI Awards, you know all kind of things.

I guess you would have a lot of memories from the time that you were doing graffiti. Would you like to share with us a personal story that is not well know to the public?

The funny stories when we were first starting out, we were in an elevator and we killed the elevator. And there was a regular person there and when we got to the bottom of the elevator there was a policeman there. And he goes to the policeman and he says, 'look these guys just vandalized the whole elevator.' And the cop did not do anything. He kind was 'yeah so?' He didn't realize you know he had all the top guys he could have caught.

So would you describe yourself as an unwilling "Father of Graffiti?"

As far as being an unwilling father, the interesting thing is that I met a lot of people who said, I am not being egotistical, but they said I changed their lives, which I find amazing. But I think I don't know why. 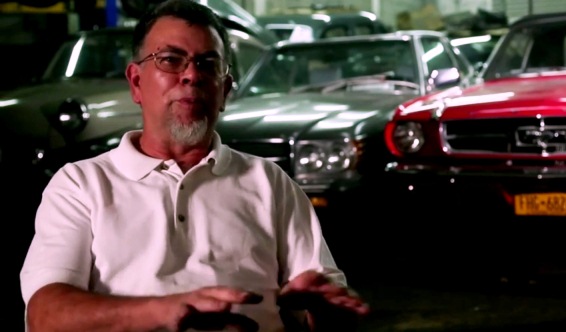 People tell many stories about you. Some of these stories lie between legend and reality. Would you like to clarify and tell us if you indeed tagged the Secret Service car and the Statue of Liberty?

The Secret Service car is true. I think it was the only time I got caught. It was a stupid thing to do, but it seemed the right thing at the time. So I was making a delivery downtown for my job and I had my marker. I saw what I knew it was a Secret Service car because of the people with the car and they had somebody they were escorting. And I figured I would write on the car, which I never do. I never used to write on people's cars. But I said I'm going to write on this car and the guy caught me. Because as we say in Greece, these Secret Service guys "have 10 eyes." And he let me go. He figured that protecting the woman was more important than dealing with me. So it was kind scary, but it was exciting at the same time.

The Statue of Liberty was creating editing from the person who made the commercial. But because of that commercial a lot of people called me who I hadn't spoken to for years, so it was kind of nice.

Do you think that everything in life happens for a reason? How did graffiti end up becoming a movement?

Things happen for a reason if it is the time for them to take off. After I stopped writing in the 80s, it (the graffiti) was very sloppy. If you went in the subway it was terrible. People were writing one on top of the other for no apparent reason. Because when I started I was writing very small and there was a blank wall. Then the next person would write bigger and bigger. But as it got bigger it got more stylized and the cream of the writers rose above it; the real artists.

You were not the only writer, but you were the only one whose name was written everywhere? How did you manage to do it?

The reason that I got around so much was partly because of my job because I was a delivery boy after school. So I went all over the city. Also, we used to go to the beach on Sundays by the subway. The beach was all the way to the other end of New York. Sunday morning nobody was on the train and sometimes we were just getting off and stopped somewhere in Brooklyn and write our names and get back on the train. So that is how it spread really far. And of course the trains traveled city wide, so somebody 20 miles away from you would get on the train and see your name. So that is how it got around so much.

How is the subway connected to the early history of the graffiti movement?

The subway was a large part of the spread of graffiti because it went through a lot of different neighborhoods. The kids who wanted to get up and be popular, that was the most popular way to get around. Just like kids in the Mid West from very small towns they would go write on trains. And those trains go all over the country. So it is just a small world.

JULIO 204 was the first tag writer. How did he inspire you and why did you decide to begin writing your name in walls?

When JULIO 204 was writing, nobody else was really writing. We didn't know it was a person. We thought that something was going to happen on July 20th at 4 o'clock. But after a while we realized he was a person and we said oh everybody knows the name but nobody knows who he is. We do the same thing, we be anonymous, but everybody would know us. That was part of the great fun of it; to be a celebrity that nobody knows. I think the only one who is still doing it that is Bansky. Nobody knows who he is but he is very popular.

What is your opinion about modern graffiti?

In the modern graffiti, I don't know if you can call it graffiti anymore because graffiti is something you do secretly. In my mind you do it, I did it not to be known for the anonymity of it.

Why did you choose your tag name TAKI 183?

Greeks would know that Taki was a short for Dimitri, Dimitraki. That is what my mother called me, everybody called me that. The only thing that I choose was the 183, I guess in respect to JULIO 204, I decided to put my street.

You were for so many years an unknown celebrity in New York City. How people react when they meet you and why have you decided to go public and reveal your identity?

A lot of people meet me or they see me after a lot of years because nobody saw my face for about 40 years. I have gone to graffiti signing and people meet me and they say 'oh that was you?' I don't know what they expected. Sometimes I feel I should have stayed anonymous but you know it is a long time since I did it and I guess I want to satisfy some people curiosity.

Did you ever feel the impulse to go back and do again graffiti?

Once I stopped I didn't really have the impulse to go back.

Graffiti is still illegal. Do you believe that graffiti is a crime?

As far as being illegal, I guess there should be some protection about private property. I know a lot younger people. You know they get arrested, they do community service, they have to pay fines, so you know I hate to call it a crime.

After all these of years, do you believe that graffiti has finally become accepted? What would you like to say to the people who are not familiar with this form of art.

I guess I would like to say that there should be some places where kids can go and write on the walls without having to look over their shoulders basically. Because even the garage here, I was thinking of doing the outside with nice art, but you may have trouble with the city. They may say it is going to attract more artists writing on areas where it is not wanted. So I don't think it is really accepted mainstream.

I would like Taki to be remembered just as somebody who did something not great but maybe something great came out of it in the end. And I have to tell you that this graffiti movement has lasted a lot longer than some other art movements. So I think that speaks for itself.

You said that you didn't have the impulse to return back to graffiti, but you just admitted that you were thinking of decorating the garage with nice art. Is it difficult to take out completely the passion for graffiti from someone, and do you remember that last time that you did graffiti?

The last time that I did graffiti was in Greece, in Athens, and that was this year. So you can't take the graffiti out of somebody.