Princess Iman is the eldest daughter of King Abdullah II and Queen Rania Al Abdullah of Jordan, while Thermiotis is a managing director at a New York-based venture capital fund.

Thermiotis was born in Caracas, Venezuela, in 1994 and is of Greek descent, the Jordanian royal court said, according to The National News. He holds a degree in business administration and works in finance in New York.

Queen Rania's announcement of her daughter's engagement
“Congratulations my dear Iman. Your smile has always been a gift of love that I have cherished since the day you were born. I wish you and Jameel a life full of love and laughter,” Queen Rania of Jordan said in a post. 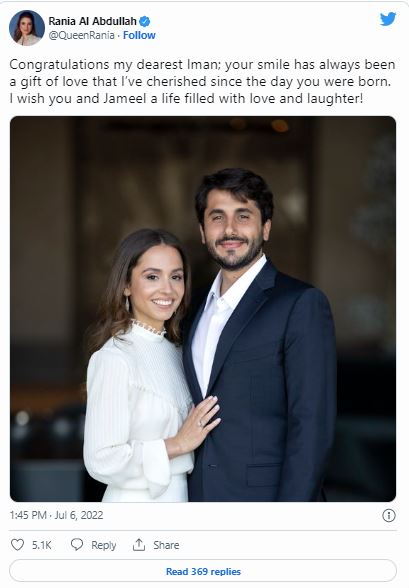 However, the palace also issued an announcement about Princess Iman's engagement, in which it is stated:

"The court of the Hashemite Kingdom is pleased to announce the engagement of Her Royal Highness Princess Iman bin Abdullah II to Mr. Jamil Alexander Thermiotis on July 5, 2022, in the presence of Their Majesties King Abdullah II and Queen Rania al - Abdullah, as well as Crown Prince Al Hussein bin Abdullah II, Prince Hashem and Princess Salma, as well as members of Mr. Thermiotis' family.

The court of the Hashemite Kingdom conveys its sincere congratulations to Princess Iman and Mr. Thermiotis, and wishes them a lifetime of happiness."