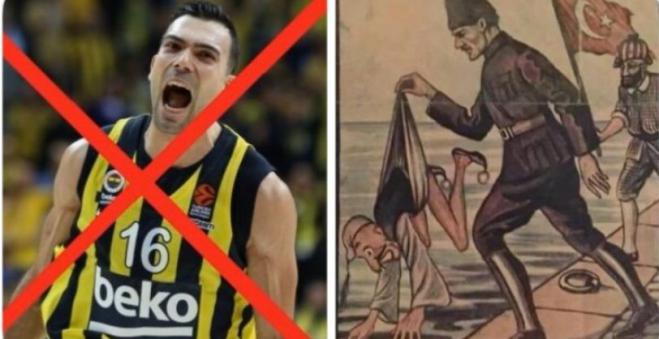 Kostas Sloukas who plays for Turkish basketball team Fenerbahce was the target of online attacks by Turkish nationalist and extreme-right fans after he refused to hold a banner with the rest of his team about the founder of the modern Turkish state, Mustafa Kemal Ataturk with references to Smyrna and the Asia Minor Disaster!

Fenerbahce players entered the Ulker Sports Arena holding a banner for the 81st anniversary of the death of Kemal Ataturk, which the Greek international did not touch…

The guard was the only one to not touch it, which prompted many fans to post aggressive and disgusting comments with reference to the Asia Minor disaster. One wrote on Twitter: “You won’t eat bread in Turkey without respecting our founder!”

After the backlash the incident received on social media, Sloukas stated he would not tolerate that he lacks respect for the country.