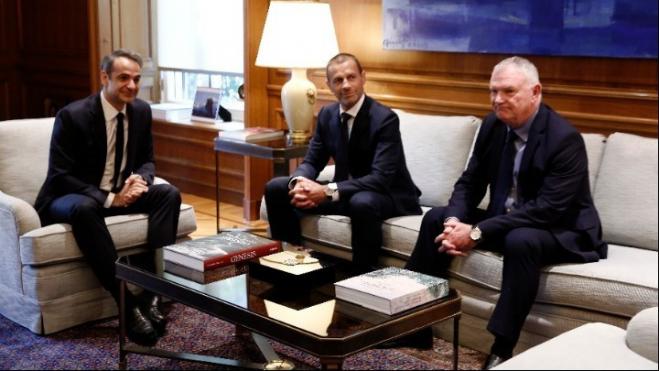 The memorandum on Greek football was signed during a meeting between Prime Minister Kyriakos Mitsotakis and UEFA President Alexander Ceferin and FIFA Vice President Greg Clark.

At the meeting, held at the Maximus Mansion, the memorandum on the reform of Greek football was signed. According to government sources, any court decisions will be respected. UEFA and FIFA will help make a new start. A new page opens in Greek football from the new year.

The same sources stressed that want a new election system in the Greek Football Federation (EPO) by changing the existing one, while also stressing that arbitration must go to foreign hands. Among other things they underlined that PAOK will receive help for the new stadium, while with AEK' field there will be two new stadiums. Regarding the PAOK-Olympiacos derby in Tuba on Sunday, government sources commented that everything went smoothly. In the last month everything has gotten better, they argued.

The football memorandum will include the UEFA-FIFA proposals that will be put to a vote in the House to prevent EPO and clubs from complaining about interference in football's administration. The aim of the Mitsotakis government is for any changes to have the "seal" of the two International Confederations.