Shortly after it became known that the former Panathinaikos basketball player Adreian Payne had fallen dead after being shot, a video was released showing the moment of his murder.

According to "FOX35" of Florida that released the video, first shots are heard and then the screams of a woman. She first called for help, and then spoke to the police, shouting tearfully: "Please help me, he shot my son. I do not know the address, he was shot, he died, please help me ".

The woman appears to be a relative of Payne, as his mother died when he was 13 years old.

As it became known on Monday, Adreian Payne was shot to death in Florida, with his former teammate Jared Salinger making the news known through social media.

The video from the moment of the murder of Adreian Payne

The announcement of the police fo Adreian Payne's murder

The perpetrator of the shooting, identified as Lawrence Doriti, born February 17, 1993, remained at the crime scene and was then taken to the police station for questioning by detectives. Doriti was arrested on a charge of first-degree murder and then taken to a detention center." 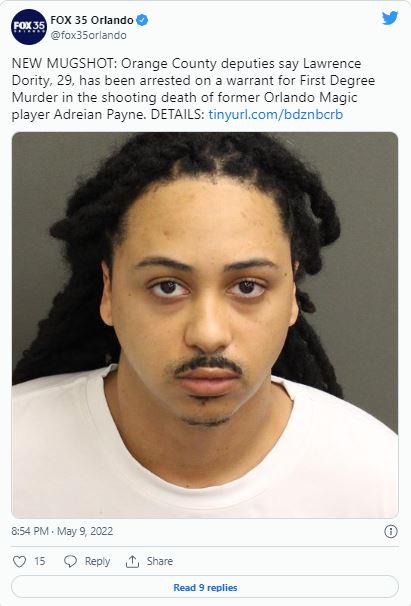 Payne's rofessional course - From Orlando and Magic, to Athens and Pnathinaikos

Payne joined the Atlanta Hawks as the 15th pick in the 2014 NBA Draft and traded with the Minnesota Timberwolves during his rookie season. He played 107 games in the NBA in three seasons, finishing with five games in the 2017-18 season, after signing with the Orlando Magic, and averaging 4.2 points and 1.8 rebounds in 13.1 minutes per game.

Magic released him after his name appeared in an ESPN post about an alleged sexual assault involving Payne and former MSU guard Keith Apling during his first year at MSU. Prosecutors did not prosecute then and no further legal action was taken following the ESPN report in January 2018.

Payne then traveled outside the US, ending the 2018 season with Panathinaikos in Greece, while playing briefly in China in early 2018. He returned to Panathinaikos in early 2019 and helped win the Greek Basketball Cup, before the two sides terminated their cooperation in March of the same year.

After spending time in France and Turkey between 2019-2021, Payne signed in December with Juventus Utena in Lithuania. He averaged 8.6 points and 4.6 rebounds in seven games before being released in February.

The announcement of Panathinaikos

"The family of KAE Panathinaikos OPAP expresses its deepest sorrow and grief for the unfortunate loss of our former athlete, Adrian Payne. "Our sincere condolences to his family", wrote the "clovers" in an announcement.

"We are devastated to hear the sad news of Adreian Payne's death. Our thoughts and prayers are with his family and friends. Rest in peace ".