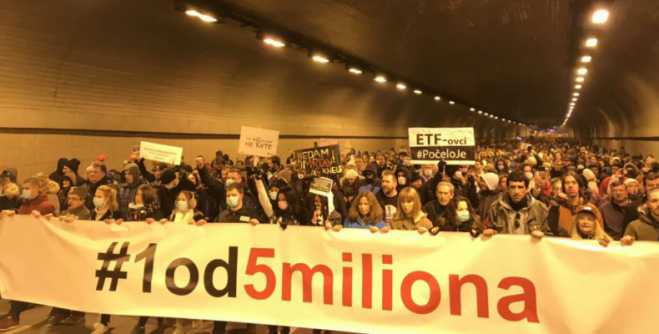 Anti-government protesters in Belgrade on Saturday evening carried medical masks in mockery of Serbian President Aleksandar Vucic, whose was pictured in a posted photo alongside an ailing child in a hospital angered critics who called it a cynical gesture.

The protesters again called on the Vucic and the government led by his Serbian Progressive Party to resign, accusing them of political violence, corruption, usurping institutions and violating human rights.

Those attending the latest “1 of 5 million” event were given medical masks, referencing Vucic’s pose in a picture with a child in the cancer ward. Social media users accused Vucic of using sick children for political purposes.

Some also asked how the President was able to visit the hospital at a time when public visits are restricted because of the influenza epidemic. The protesters on Saturday also called for Health Minister Zlatibor Loncar’s resignation.

The President started his “The future of Serbia” campaign in February, announcing he would visit all parts of Serbia and report on the results of his ruling party. Many believe the tour forms part of preparations for oft-mentioned early elections.

Protesters on Saturday passed through the tunnel in the center of the city, saying they were “opening the tunnel of lies of Aleksandar Vucic”.

Among the protesters were parliamentarians but also local councilors who have decided not to participate any longer in parliamentary or municipal sessions in support of the protests.

The protesters glued posters with Vucic’s false statements and failed promises along the tunnel walls as they walked.

Immediately after the protest, city sanitation workers were dispatched to tear the posters down, however, the citizens who were still in the tunnel chased them off.

The protests began on December 8 last year when an opposition politician was attacked in the south of the country and originally focused on the theme of state violence.

They have since spread to dozens of cities and towns and embraced a range of other issues.