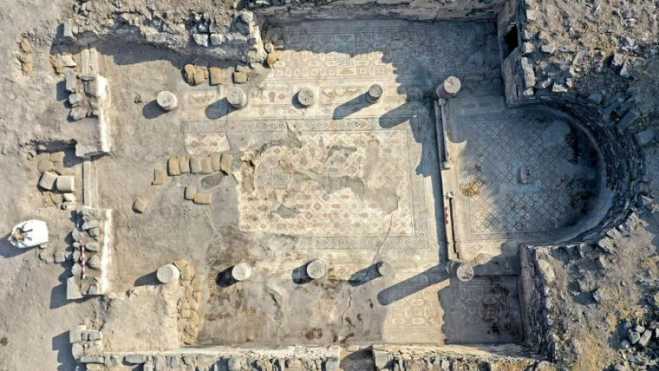 Archaeologists working on the site of an early Christian church near the Sea of Galilee have unearthed a mosaic depicting five loaves of bread and two fish.

The mosaic was uncovered in the so-called Burnt Church at the Hippos-Sussita dig in Gennesaret, known today as Lake Kinneret, overlooking the Sea of Galilee in northern Israel, Haaretz reports.

One of Jesus' most famous miracles is the feeding of the 5,000 with just five loaves of bread and two fish.

Alongside the bread and fish, the design of the mosaic incorporates pomegranate motifs. The Burnt Church was discovered by a team of archaeologists in July and has since yileded up some ceramics dating the construction of the building to the fifth century.

The building is referred to as the 'Burnt Church' because it fell into ruin after being ravaged by fire. In a stroke of good fortune, however, it was the layer of ash that protected the mosaic flooring over the following centuries from sun damage.

Dr Michael Eisenberg, co-director of the Hippos-Sussita excavation, is working at the site alongside Arleta Kowalewska. Both are from the Zinman Institute Archaeology at Haifa University.

Speaking of the site's close connection to the early followers of Christ, Dr Eisenberg said: "Looking down, they must have thought of the miracles and works of Jesus around the lake just below."

Mosaic floors have been uncovered in the nave, the apse and the side-aisles. Thanks to the ash layer, their colours remain vivid today.

The loaves depicted in the mosaic are all different colours, something Dr Eisenberg said may have signified different types of bread.

"There are definitely five loaves, not three or six. Their colors may reflect different types of flour, wheat and barley. Then there is the pair of fish on the mosaic in the apse," he said.

"The association that came to mind was the miracle of the loaves and fish."