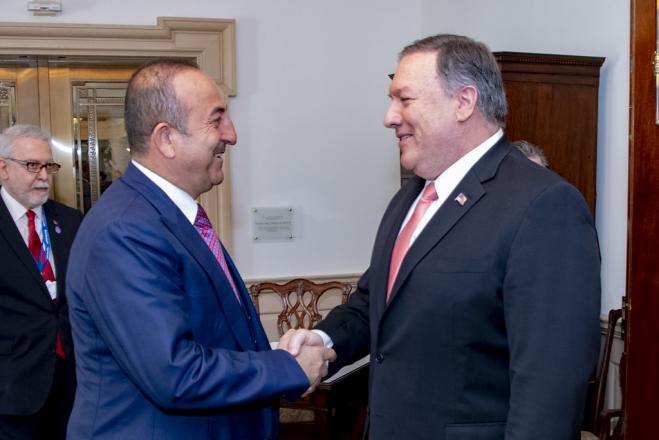 Mr Çavuşoglu said he had explained to Mr Pompeo "Turkey's position in the eastern Mediterranean on the map and explained to him our constructive approach in the meantime, Turkey's just cause and its continental shelf". Greece, the Turkish Foreign Minister said in his statements, is conducting "black propaganda" and says that Turkey is unjust and acts against international law with Mr. Çavuşoglu arguing that Turkey's actions are compatible with international law.

Asked to comment on Joe Biden's statements published in Turkish media yesterday, Mevlüt Çavuşoglu said that with them the US presidential candidate and former Vice President "exceeded the limits", are not in line with the ethics of diplomacy and noted that Joe Biden has repeatedly said he will not overthrow Tayyip Erdogan in a coup but by providing support to the opposition, according to the Cyprus Agency. "What I understand is this: (Mr Biden) says ‘we tried the coup in the past, it did not succeed. Now let's change the way and tactics.The Turkish nation completely rejects such behavior. "Now we are strong both on the table and on the field. That is why, even if it does not recognize the Turkish nation, it was a statement made irrelevantly and exceeded the limits. "

The Turkish Foreign Minister reminded that Mr. Biden had visited Turkey after the coup attempt and then had apologized to President Erdogan, saying that he should have gone earlier, describing that attitude as hypocritical. Mr. Çavuşoglu also appeared annoyed with Biden's reference to MPs of Kurdish origin, saying that with "our Kurdish brothers" they fought in Canakkale and have been in the Turkish National Assembly since its founding. Çavuşoglu also said that during his presence at the ceremony of the new President of the Dominican Republic, he had the opportunity to talk with his counterparts from Spain, Guatemala, the President of Guinea-Bissau and the Minister of Labor of Serbia.