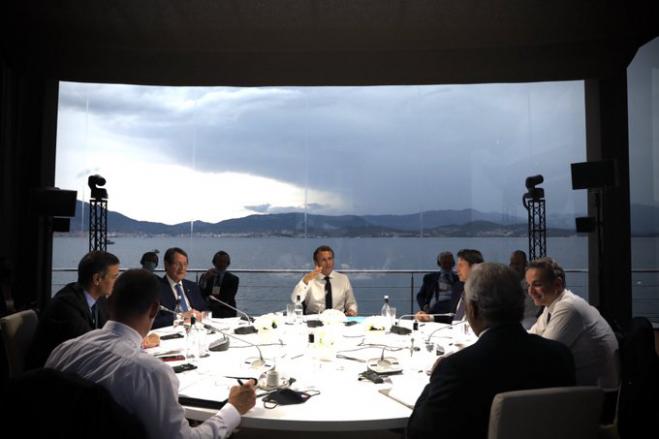 The discussions of the MED7 leaders ended yesterday in Corsica with clear messages to Turkey, regarding its position in the Eastern Mediterranean, but also full support to Greece and Cyprus.

Kyriakos Mitsotakis and Emanuel Macron, in a private meeting on the sidelines of the conference in Corsica, fully agreed on how Europe should move vis-a-vis Ankara, with the two leaders making it clear that dialogue could only take place if Turkey stops. provocations, otherwise the path of sanctions will follow.

In fact, according to government sources, the prime minister is expected to make a more detailed report on what was discussed in Corsica, during his speech in Thessaloniki on Saturday.

Mitsotakis: We will not allow Turkey to divide Europe

In the joint press conference of the "7", Kyriakos Mitsotakis spoke about a very "clear message in Turkey".

"The conclusions of the Summit in paragraph 6 send a very clear message. They show the way for Turkey. If it really wants an honest dialogue with Greece, Cyprus and the EU, it must prove it in practice. To stop unilateral actions, to give convincing signs that it strictly respects international rules and not selectively. "End of challenges, beginning of discussions", he stressed initially, clarifying that "the Mediterranean is a vital area for European security as a whole and is not assigned to third parties".

"In the run-up to the European Council (September 24-25), we will prevent Turkey from attempting to divide Europe. "Support for Greece and Cyprus is not an expression of solidarity, it is a recognition that strategic interests for Europe are at stake," he added, noting that Turkey has time to take a step back.

"To abstain from maritime and research activities in undelineated maritime zones, to return to the table of exploratory talks, from where it left in 2016, and if we do not agree, there is always the solution of the Hague Tribunal," he said.

"This is the first time I have participated in the Euro-Mediterranean Conference and I can say that since its inception it has never had to face so many and complex challenges. Our sympathy has never been so strong. "I wish next year, when he will be hosted in Greece and specifically in Crete, that all things will be much more optimistic", the Greek Prime Minister concluded in his statements.

"Our Mediterranean is today the theater of prolonged conflict, in Syria, in Libya. "The hegemonic game of historical forces seeking to destabilize the whole region and the role of Russia, as well as Turkey, are of concern to us."

Macron also referred to the tragedy in Moria, stressing that both France and Germany will contribute by welcoming unaccompanied children.

"France and Germany will join forces and we will propose that we also take on unaccompanied minors. "We need to renew the agreement with Turkey, for the readmission mechanism to work," he said.

Regarding the situation in the Eastern Mediterranean, he said that "there is no doubt about the support to Greece and Cyprus and our common goal is to restore stability in the region, to stop unilateral actions, to stop drilling, of course."

"We are not naive," but the Med7 countries want to resume a "good faith dialogue" with Turkey, said French President Emanuel Macron.

"Pax Mediterranea" (Peace in the Mediterranean) wrote on Twitter by Emanuel Macron, at the end of the conference. A message that France has strategically chosen the side that will support the Mediterranean, Greece, but also that it is a superpower, as it used to be with Pax Romana and Pax Americana.

Conte: Solidarity to Greeks and Cypriots

The Prime Minister of Italy, Giuseppe Conte, also expressed Rome's solidarity with the Greeks and Cypriots, who "face unilateral actions from Turkey", after the end of the Med7 Summit in Corsica. "Tensions in the Eastern Mediterranean region concern us all," Conte said.

For his part, Nikos Anastasiadis did not hide his satisfaction with the fact that the leaders of MED7 had a unanimous position on the situation in the Mediterranean.

"I welcome the unanimous position, but also the determination of all European leaders, as reflected in the joint declaration on the need to end Ankara's illegal actions in the EEZ of Cyprus and Greece," said the President of Cyprus.

"We agreed that we will use all EU means to address the Turkish provocation, including additional sanctions against all those involved in illegal activities in Cyprus, and that the issue of EU-Turkey relations will be further discussed at the forthcoming European Council." He added that Ankara should respect international law and "enter into negotiations for the delimitation of the maritime zones between us or the submission, if they refuse, of the whole case to the International Court of Justice in The Hague".