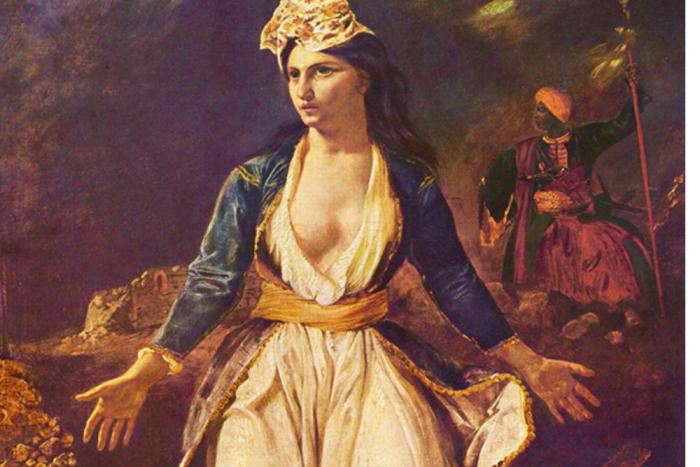 Public Domain. Hellas Expiring at the Ruins of Mesologgi by Eugene Delacroix, 1827.

It’s not clear what freedom has become. So many claim it, but so few understand it. We probably connect this virtue to right of free speech and to the absence of old-style free-slave despotism.

But how are we to explain freedom in the United States and the Republican Party and Republican Americans that elected Trump who tried burying democracy and freedom?

What I can say with certainty is that freedom is in danger. Oligarchy and tyranny, on the other hand, have found a fertile ground in an increasingly plutocratic America.

Unless Trump is brought to justice for the environmental and public health crimes of his administration, and for the treason he committed for urging his followers to take over the government with the insurrection that took place on the Capitol, January 6, 2021, and unless the billionaire class is brought under the rule of law, America will have the fate of the Roman republic.

The republican Romans knew Greek freedom, but they were too busy killing each other to pay attention. They fought their decades-long civil wars in Greece.

Greeks invented political theory and freedom. In fact, freedom was within their civilization: piety for the gods, polis, athletic games, education, literature and art.

The Greeks created their freedom. They founded the polis, which enabled them to pass laws that protected their right to speak freely, and to govern and be governed by citizens of the polis.

In other words, the Greeks experimented with a variety of constitutions that either embraced freedom (democracy) or limited freedom to a few (oligarchy) or just one (monarchy and tyranny). The Athenians proved that direct democracy was the best defender of freedom.

The Greeks were extremely competitive, however. Such antagonism often gave rise to hubris and discord, even war. Oligarchy and tyranny empowered the few who weakened the common interest and defense of most of the many small Greek poleis (city-states).

The loss of Greek freedom

This brought Rome and Christianity to Hellas. They wrecked Hellenic civilization and, in time, the image we have of ancient Greeks and their civilization.

The Greeks suffered what people suffer when they lose their freedom. Western Christians and Moslem Turks captured and humiliated and impoverished Greece.

One example of that subjugation illustrates the price of living without the divine-like virtue of freedom, which was everything for the Greeks.

In January 1824, Lord Byron, the most celebrated Philhellene in Europe, arrived in Mesologgi in Central Greece. The Greeks of the beleaguered city welcomed him like a hero and defender.

The poems of Byron praised Greek virtues. He loved Greece. He tried convincing the European powers to intervene on behalf of the Greeks struggling valiantly since 1821 to free their country from Turkish occupation. However, he died in Mesologgi in April of 1824.

Meanwhile, the Turks were fighting back. The Sultan promised his Egyptian vassal, Mohammed Ali and Ali’s son, Ibrahim Pasha,  Peloponnesos, if only they could defeat the Greek Revolution raging against him successfully since 1821.

The Egyptian ruler sent a large fleet to crush the Greek rebels. The arrival in Peloponnesos of the Egyptian and African troops meant an all-out war of extermination.

During 1825-1826, these foreign armies besieged the strategic town of Mesologgi. The Greek defenders fought successfully for several months against the much larger enemy army. But in time the Egyptian-African troops shut down the land and water ways Greeks used to supply food to the defenders of Mesologgi.

In desperation, the population of half-starving Greeks tried to get out of their besieged city with catastrophic losses. But before this heroic exodus, some of the people of Mesologgi blew themselves up of committed suicide.

This great heroism and tragedy touched the feelings of the Europeans who had heard stories from Philhellenes who fought with the Greeks against the Egyptian-African and Turkish troops.

One of the Europeans who got infuriated with the fall of Mesologgi was the famous French artist and painter, Eugene Delacroix. In 1823, he had painted a canvas of the 1822 Turkish massacre of the population of the Aegean island of Chios. He had also read the poetry of Lord Byron. In 1827, he produced his masterpiece of Hellas expiring at Mesologgi, which inflamed the passion of Europeans trying to convince their governments to do something on behalf of Greek freedom.

No doubt, the brutality of the invading Egyptian-African and Turkish soldiers in Peloponnesos, and Mesologgi in particular, had something to do with the European intervention in Greece. In October 1827, a fleet made up of British, Russian and French warships annihilated the Egyptian-African and Turkish fleet at Navarino in Peloponnesos. This ally victory brought independent Greece into being.

Another person who was caught in the flames and passion of the struggle at Mesologgi was a privileged Greek named Dionysios Solomos, 1798-1857. He was born in the Ionian island of Zakynthos. He was educated in Italy, but his talent blossomed in Greek poetry. His inspiration came from the ancient Greek tradition of poetry as well as the equally rich source of modern Greek peasant poetry, wedding and festival songs, and stories.

The Greek Revolution touched his soul. In 1823, he wrote the Hymn to Freedom, which became the Greek national anthem. Solomos traced freedom right from within the roots of Hellenic civilization.

“I recognize you, eleutheria, freedom,” he said, “from the terrible cuting edge of the sword… You come straight from the sacred bones of the Greeks and, like in ancient times, you are full of manliness and courage, hail o hail eleutheria!”

In 1844, he wrote a poem, The Free Besieged, in which he resurrected the heroic struggle of the people of Mesologgi.

Like ancient Greek poets, Solomos has a goddess—like woman relating the story of Mesologgi under siege. The woman wore a black cloth, as black as the blood of a hare. Walking towards Mesologgi was stepping into deep darkness, light, thunder and thunderbolt.

The black-dressed woman says the drama of Mesologgi unfolded while nature was blooming, its beauty overwhelming. What with the land, flowers, birds, and the sky merging to a gigantic beautiful being. Nature wanted to enter the human soul and besiege human nature on the surface and in depth.

The enemy was tempted to speed up its conquest in order to possess this beautiful land. But to the besieged Greeks, the exquisite land caused pain as they knew they would  lose it.

We are all free but besieged. The plutogenic climate change has been threatening massive harm, more plagues, and destruction. And like climate change, oligarchy and plutocracy are rising and engulfing our politics, threatening freedom here at home and all over the world.

The lessons of Greek history are potent.  \