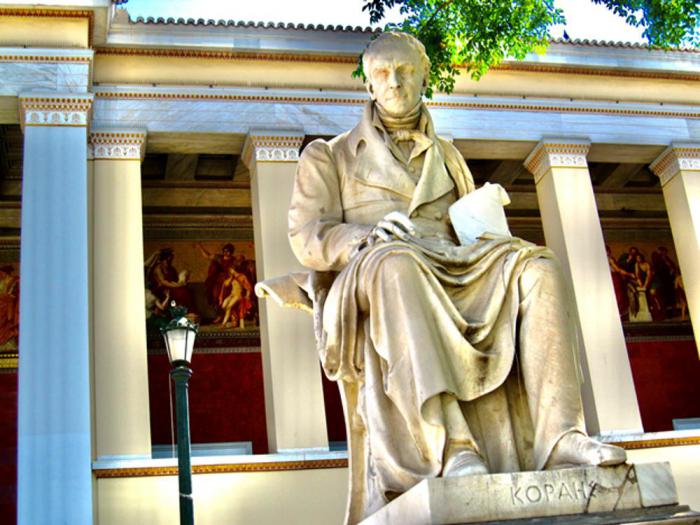 Photo: Evaggelos Vallianatos. Adamantios Koraes, 1748-1833. Father of the Greek Revolution. Marble statue in front of the University of Athens

The first time was on the immediate aftermath of the French Revolution of 1789. European governments, including that of the Ottoman Turks, went into alert about subversion from within and without. Patriarch Anthimos of Jerusalem launched a campaign on behalf of the Sultan among the Orthodox. In late 1790s, he published Paternal Teaching, a defense of Turkish tyranny, telling the Orthodox they had to put up with oppression as their ticket to heavens.

The news reached Koraes in Paris. In 1798, he published anonymously in Rome his Brotherly Teaching, a vigorous denunciation of the clerical lies praising the rule of the Ottoman Turks over the Orthodox Christians. Anthimos said that Jesus raised the Ottoman Turks from nothing to heights of power in order to protect the Orthodox from the scheming Western Christians. Koraes argued that such a slander could not have been written by a patriarch.

The second time Koraes turned his attention to the clergy was in 1806. He published anonymously in Livorno, Italy, a Philippic against priests, monks, and bishops. He entitled this powerful revolutionary book: The Greek Nomarchia (Rule-Government of Law), Namely a Speech On Freedom. Koraes likened the synod of bishops in Constantinople to a pack of wolves kepping the Greeks in the Turkish enclosure.

How do I know Koraes wrote the Greek Nomarchia? In the early 1970s, I wrote my dissertation about him. He touched me profoundly.

I was then in my twenties at the University of Wisconsin. I was perplexed why Americans and Western Europeans were so far advanced in the sciences, while, Greece / Hellas, mother of the sciences and civilization, was impoverished to the point I had to seek an education in a country thousands of miles away from home.

I chose Koraes for my thesis because I suspected he might help me clear my mind about any doubts or questions I might have had about myself and Hellenic culture. More than that: I wanted to know the relevance of ancient Greek thought. I loved Homer. But did Homer and other Hellenic thinkers made any difference in the life of modern Greeks, or was there an influence from ancient Greek thought on what you do or what you could have done?

I read his hundreds of letters and went through something like seventy volumes of his work: of original writing, translations, edited books with massive commentary-reflections. This reading gave me confidence to judge his style, language, and, primarily, his ideas and intimate grasp of Greece of his time and his knowledge of Hellenic philosophy, politics and science. This led me to see behind the anonymity of Nomarchia and identify it as the work of Koraes.

In another anonymous pamphlet he wrote in 1801, Blowing the War Trumpet, Koraes said the Turkish nation, “thrice-barbarous and vile,” was the antithesis of freedom, which was sacred and, to the Greeks, as much a vision as vision is to the eyes. Freedom, he said, has been necessary for man so that he knows he is a man. In other words, freedom is everything.

Koraes warned the Greeks not to rely on foreigners but fight to the last man and free themselves with their own strength.

Koraes knew that not all Orthodox clerics were Turkish agents or wolves. He respected the Orthodox faith of his ancestors. In his Autobiography, which he wrote in 1829, he said it was inevitable that the lengthy rule of the Turks would corrupt the  Greek population, and the Orthodox clerics in particular. It did.

However, if one compared corruption among chief Orthodox ecclesiastics to that of the clergy serving the Pope, Koraes said, the “sins” of the Orthodox clergy paled into insignificance to the abuse of justice and other crimes of the Catholic priesthood. Koraes had probably the crusades and religious wars in mind.

Koraes was no enemy of the Orthodox clergy. Some of his most devoted students were clerics. Not a few of them protected ancient Greek culture. This had a long history.

The ninth-century Patriarch Photios, for example, abridged 280 classical authors. He was a great humanist and scholar that protected classical Greek learning.

Metropolitan Bessarion in mid-fifteenth century presided over the failed effort of uniting the Orthodox and Catholic Churches at the Council of Ferrara-Florence, 1438-1445. Pope Eugene IV was so pleased with the work of Bessarion that he made him a cardinal. When Bessarion left Constantinople for Rome, he carried with him the greatest collection of Greek manuscripts ever to reach Europe. These philosophical, scientific, and literary works seeded the Renaissance with Greek thought and science.

In the 1800s, there were clerics who protected the vulnerable Greek population from excessive violence. They educated the young rudimentary reading and writing. And when the Greek Revolution broke out, they fought with the irregular forces against the Turks. The Greeks had the burning desire to live free or die. They wanted to revenge their humiliation; they wanted to punish the Turks for crushing taxation, the abuse of their children, and the kidnapping of their young sons.

Koraes knew of these enlightened clerics who were fundamental in the transmission of Hellenic science and wisdom to the West. H knew Europe well, too. In addition to his mastery of Greek and Latin, he was fluent in French, English and German. A Protestant pastor in Smyrna was his language teacher. He worked in Amsterdam as merchant for six years. Nevertheless, he was concerned with the turn of European politics during the Napoleonic administration and after..

He kept calling Europe Enlightened. He praised the French Revolution, which damaged despotism. Napoleon, however, said Koreas in his Autobiography, failed to free Europe from tyranny, becoming a despot of despots. Instead of spreading eudaimonia (happiness) all over Europe and becoming a god on Earth, Koraes said, Napoleon preferred the lies of his flatterers.

Koraes shared the Platonic idea of philosopher king or, at least, government by well-informed people. He was pleased with the increasing influence he had in the pre-revolutionary decades. So, he thought the Greek Revolution should break out in the 1850s. Greeks then would be in a position to have a successful revolution and good government.

But political reality dictated the outbreak of the revolution in 1821.

This was a time of the Holy Alliance that disturbed Koraes. He also did not expect the first president of independent Greece to come out of Russia. His Greek contacts so biased him about President Ioannes Kapodistrias, that he needlessly and wrongly attacked him as a Russian agent.

Aside from this grave error in his old age, Koraes was one of a kind. Of all Greek intellectuals who helped the liberation of their country, Koraes was by far the most important. He was a revolutionary and a classicist who understood the power of Hellenic thought and  civilization – more than two millennia after they originated and flourished in Hellas. He lived in the twilight of the Renaissance and the Enlightenment when all things seemed possible, what with the resurrection in Western Europe of Greek mathematics, astronomy, medicine, and mechanics, including classical studies and scholarship.

His books brought all that power of the ancient and modern world together. He got the European scholars thinking that ancient Greeks were alive in persons like him. His edition of Hippocrates’ Airs, Waters, Places in 1800 in Paris was a landmark of scholarship and science. This was a pioneering study of environmental medicine and the critical role of climate in public health and civilization. Besides, European respect for Koraes increased Philhellenism in Europe. Modern Greeks were fighting a grossly unequal struggle with the Moslem Turks supported by European governments. Wasn’t that wrong?

The books of Koraes found most of their readers among Greeks. They inspired them to revolt and fight and die for freedom.

That’s also what attracted me to him. I, too, was fighting my own rebellion. He answered my student anxieties. He assured me that reading Hellenic poetry, literature, philosophy and science was useful and timely for understanding myself, my ancestors, and the world. In fact, thinkers like Homer, Hesiod, Thales, Pythagoras, Plato, Aristotle, Euclid, Archimedes, Hipparchos and Ptolemaios have become my contemporaries.

Koraes made that possible. He was a golden link reuniting ancient and modern Greece.

Koraes received his medical degree at the University of Montpellier, France. On May 24, 1788, he arrived in Paris. This was on the eve of the outbreak of the French Revolution. He had strong letters of recommendation from his professors, which opened important doors for him.

He saw in Paris the Athenian democracy of the fifth century BCE. The French Revolution shocked him, but despite its danger, he decided to make France his permanent home, and never return to the tyranny of the Turks.

He never practiced medicine but a pedagogy of liberation. Like Aischylos, he never ceased telling the Greeks their struggle against the Turks was of the utmost timeliness and of the highest political importance. It was a life and death struggle for freedom.

He spent his life translating the virtues and achievements of ancient Greek civilization into accessible wisdom and inspiration. For about 44 years he edited Greek classical texts with lengthy prolegomena-introductions in modern Greek, highlighting the tremendous political significance of ancient Greek thought to modern Greek freedom, language, culture, democracy and prosperity. His books circulated among Greek merchants and most Greek schools as student textbooks.

Koraes was seventy-three years old at the outbreak of the Greek Revolution in 1821. Though he was concerned the revolution came prematurely, he spent the last twelve years of his life, 1821-1833, editing political texts from ancient Greece and Europe. His purpose was to inspire successful strategies for defeating the Turks. He emphasized the intimate connection of politics to ethics and the need for civilized government to abolish capital punishment and torture and other barbaric customs.

Koraes transformed Greek political thought into a successful revolution. Hellas was grateful to him.

More in this category: « Tourism in Greece: From Heavy Industry to Prosperous Hospitality and Love of Nature Free Besieged »