Global warming, climate change, pollution, the list goes on and on… We are constantly being warned that if we do not change our ways that we may permanently alter our environment. However, ecological issues and the human misuse of our natural environment and the resulting long-term consequences are not unique to our times. Nearly 2,500 years ago, Plato lamented over the land degradation that stripped the once lush hills of Greece.

The breathtaking beauty of Grecian landscape is epic, an ancient land of myth and unrivaled beauty. The inspiration for countless artists and poets… enchanting blue skies and sparkling turquoise waters, strikingly beautiful terrain; dry, rugged and barren in some areas, while fertile and green in others. However, despite the beauty of its environment, modern Greece is facing many environmental issues such as acid rain, air pollution, soil erosion, and desertification to name a few. Are modern Greeks to blame for all of the environmental woes they are facing?

Modern scientific research has uncovered that the landscape of modern Greece that we are now familiar with is quite different from the land of ancient times. In Critias, according to Plato, “the land was the best in the world,” and “in comparison of what then was, there are remaining only the bones of the wasted body,” whereas “all the richer and softer parts of the soil having fallen away, and the mere skeleton of the land being left.” “In the primitive state of the country, its mountains were high hills covered with soil, and the plains, were full of rich earth, and there was abundance of wood in the mountains. Of this last the traces still remain, for although some of the mountains now only afford sustenance to bees.” “There were many other high trees” and “abundance of food for cattle. Moreover, the land reaped the benefit of the annual rainfall, not as now losing the water which flows off the bare earth into the sea, but, having an abundant supply in all places,” and “providing everywhere abundant fountains and rivers.” “Such was the natural state of the country, which was cultivated, as we may well believe,” by “lovers of honour, and of a noble nature, and had a soil the best in the world, and abundance of water, and in the heaven above an excellently attempered climate.” (1) 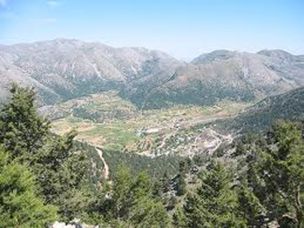 Recent archeological and geologic research has found evidence to support Plato’s claims. Pollen analysis indicates the soil erosion that occurred as a result of deforestation in ancient times was caused largely by anthropogenic causes. Deforestation and subsequent soil erosion has been connected to periods of intense human settlement i.e. introduction of agriculture, overgrazing and the construction of buildings during ancient times. (2) Other factors that contributed to deforestation included the immense quantity of wood required to build ships for wars and colonization for the seafaring Hellenes, as well as the wood required to support metallurgical and ceramic industries.

Like modern man, the Ancient Greeks could not see that their short-term attachment to resources and a lack of long-term vision would undoubtedly have long-term consequences on the ecological landscape of this ancient land thousands of years later. Plato’s words speak to mankind today on an even
greater level than they did 2,500 years ago. Everything we require for our survival and well-being depends, either directly or indirectly, on our natural environment. However, as Albert Einstein declared, “We can not solve our problems with the same level of thinking that created them.” Lets heed the cautionary words of Plato and change our mindset first and right action will follow. Rather than living off of the fertile and abundant “interest” offered by planet earth, human beings have been withdrawing from the “principal” i.e. precious and finite non-renewable resources such as fossil fuels and trees. Through increased education, communication and cooperation, humans can work together to fulfill not just the basic human requirements of both present and future generations in a just and equitable manner, but rather leave behind a legacy in which mankind and planet earth will thrive and flourish as a whole.