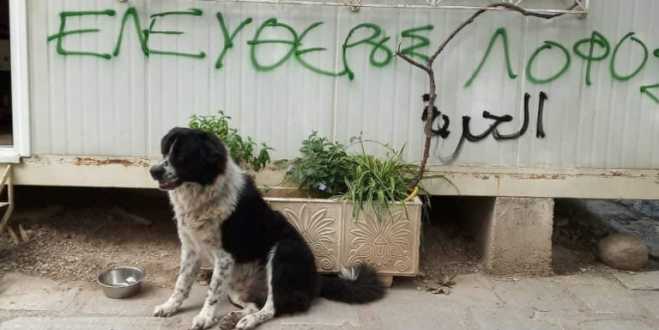 Vandalism by a group of people, noon, at the archaeological site of Filopappou and Pnykas is reported by the Panhellenic Association of Guardians of Antiquities.

More specifically, according to a statement of the Panhellenic Association of Guardians of Antiquities, on Sunday 7/4/2018 at 15:30 a group of about 70 people who participated in a protest on another subject headed to the gate in the Archaeological Site of Pnyx, and forced the guard to open it to pass. And vandalism followed.

After warning the guard that they would come back, they sprayed slogans
The guard refused, and as he reported, they told him "open now because we will return in the evening and it will be much worse." They bypassed the bar that was blocking entrance and caused damager which will necessitate its replacement and headed to the two containers in Pnyka that house the Archaeological Service staff.

There they stripped half the fencing, entered the fenced area, wrote slogans on the containers and then οn the guardpost and then left. "

"It is not the first time that such incidents happen," says the Panhellenic Association of Guardians of Antiquities and continues, "the political leadership of the Ministry of the Interior and any relevant department, including the police, should take these acts into account.

We appreciate that some are slowly trying to set up a second "state" and the great obstacle is the archaeological service. "