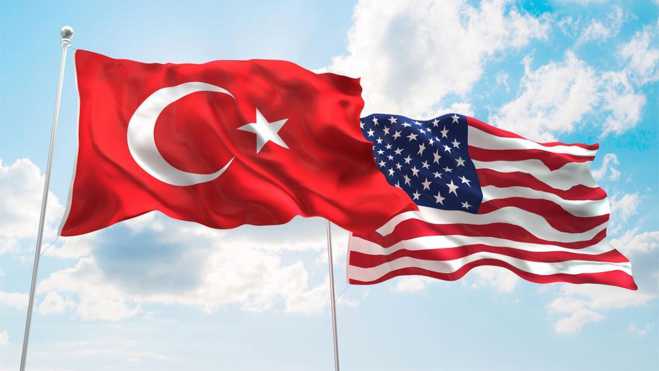 German media Handelsblatt notes a change in the balance of power in the eastern Mediterranean, with the strengthening of US ties with Greece and Cyprus, as the tensions between Washington and Ankara over the S-400 escalating.

But it also sees potential dangers for Athens and Nicosia from Ankara's unpredictable reactions if the US-Turkish squabble over the Russian S-400 missiles further escalates.

The authoritative German financial newspaper notes that the visits by US Democratic senator Robert Menendez to Nicosia and Athens and the USS Mitscher in Piraeus (whose commander, Lt. Col. Ian Scalatine, pointed out that "our cooperation with Greece is vital for safety in this vital area ") marks a major change in the eastern Mediterranean. While US-Turkish relations are frigid, Washington is increasingly looking on Greece and Cyprus as partners in the region.

Handelsblatt underlines that Turkish President Tayyip Erdogan caused a serious crisis in his country's relations with the US whose government threatens to stop the F-35 tradition but also with sanctions by ordering the Russian S-400 anti-aircraft systems. However Erdogan seems alooft, as he insists he will not go back on the deal with Moscow for the S-400.

"In Washington, there is a growing doubt about the NATO partner's commitment to the Alliance and so Greece and Cyprus are entering the scene",  it writes, recalling that before his departure for Nicosia, Republican Senator Menendez and his Republican colleague Mark Rubio have tabled a bipartisan bill that provides for the lifting of the arms embargo on the sale of American arms to the Republic of Cyprus, the support of the tripartite Greece-Cyprus-Israel, the provision of a small military assistance to Greece, while placing pressure on Ankara as it provides for suspending the delivery of the F-35 as the latter persists in its acquisition of S-400, while asking the State Department to inform Congress of Turkish violations in the Aegean and in the Cyprus EEZ.

Washington's patience for S-400s and Turkish aggression has reached its limit
As Handelsblatt says, not only is Turkey's attitude towards the S-400 issue exhausting Washington's patience, but also its aggression in the eastern Mediterranean." Ankara does not only question the borders in the Aegean," the newspaper said. "Turkey, which has been maintaining 35,000 soldiers in the northern part of Cyprus since 1974, has been raising claims for the mineral wealth off the southern shores of Cyprus, which is a member of the EU, and where the American energy group Exxon Mobil, among others, is drilling. "We are clear that we will not tolerate this further aggression of Turkey in the Eastern Mediterranean," said Menendez.

The transformation of Alexis Tsipras
The German daily underlines that with the change of Washington's stance towards Ankara due to the S-400 and a series of disputes over several other issues, such as Syria, the United States and Greece have been negotiating for a long time a strengthening of their military cooperation by discussing among other thing the possibility of creating a new base for the US Navy beyond Souda,  in Karpathos, the use of Thessaloniki and Alexandroupolis airports by the Americans and the base in Larissa by US KC-135 "flying tanker".

The article stressed that since December last year the State Department has begun a "strategic dialogue" with Greece for closer cooperation on defense and energy issues as Washington supports the plans of Greece, Cyprus, and Israel for the construction of the East-Med pipeline, which will transport natural gas to Italy, thus reducing Europe's dependence on Russian gas. And he notes:

"Relations between Washington and Athens are now as close as they were in the 1960s, before the wave of anti-Americanism caused by the US-backed coup of the colonels in Greece. Ironically, the Athens-Washington approach is under the auspices of the left-wing Prime Minister Alexis Tsipras, who, until a few years ago, blasted Washington, as the leader of the opposition, for "American imperialism" - another example of the amazing transformation of Tsipras from a left-wing rebel to a sober realist politician .

The risks to Greece and Cyprus from the US-Turkish squabble over the S-400
But Handelsblatt also sees risks for Greece and Cyprus from the escalation of US-Turkish bickering: "Greece's geostrategic gravity is boosted by the rupture between Ankara and Washington. But that also entails new risks. If the confrontation with the United States on the missiles escalates, Turkey may turn into a completely unpredictable neighbor for Greeks and Cypriots.

Turkish Defense Minister Hulousi Akar wants to deploy one of the S-400 batteries near Istanbul. The missiles have a range of 380 km. So Turkey could shoot down aircraft in northern Greece and the eastern Aegean. " Recently, Milliyet also wrote about the deterrence role of the S-400 arrays in response to "Greek violations".