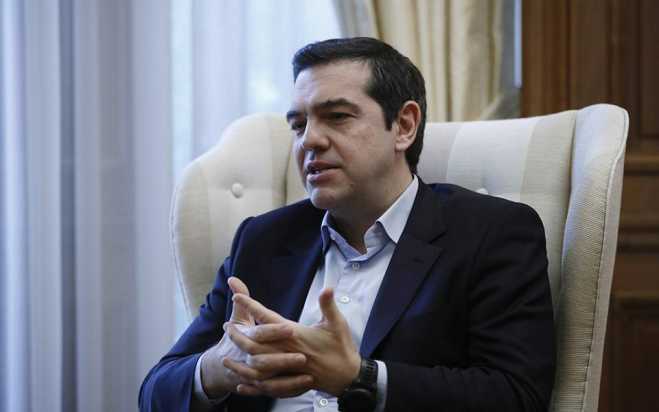 The European Union must send a clear message to Turkey, so that it stops its illegal activities in Cyprus' Exclusive Economic Zone (EEZ), Prime Minister Alexis Tsipras underlined during the informal EU leaders' summit taking place here on Thursday.

In a statement made after the summit, Tsipras said that he had fully support Cyprus President Nicos Anastasiades and that they jointly highlighted Turkey's illegal actions."At the next summits, in May and June, the EU must examine the steps and measures that are necessary if Turkey's provocative behaviour continues. Turkey has to understand that it must come to the table and talk, in the same way as other Mediterranean countries, and not proceed with unilateral actions. I presented Greece's positions as regards sovereign rights," Tsipras said.The Greek prime minister said the summit meeting had focused on the future of Europe with respect to strengthening social cohesion, emphasising the need for a "social Europe, [that is] attractive to its citizens, with less austerity and more growth."At the same time, he added, Europe would be unable to play this role unless it upgraded its international and geopolitical presence and guaranteed international law and the sovereign rights of its member-states.Tsipras also noted that the issue of Turkey was a European issue in that the EU, in addition to its geopolitical interests, also had to protect its energy interests and secure the energy sources in the Eastern Mediterranean.According to a Greek diplomatic source, meanwhile, the Juncker spirit - who on arriving at the summit stated that 'Today I am Cypriot' - prevailed during the summit meeting, where Turkey's activities in the Cypriot EEZ were discussed at length.Anastasiades and Tsipras spoke successively during the summit, the source said, with Tsipras noting that the discussion on Europe's future necessarily also focuses on upgrading its role in international developments. According to the Greek prime minister, the EU cannot have a reliable international role if it is unable to protect the sovereign rights of its member-states and is unable to ensure stability in its own neighbourhood, the Western Balkans.Tsipras highlighted the importance of the March 2018 summit conclusions regarding Turkey's provocative behaviour and the statement made at that time by the EU's head of foreign affairs and security policy, Federica Mogherini, saying that it was vital for the EU to act on these conclusions in order to support its credibility.He also pointed out that Greece and Cyprus have invited Turkey to engage in dialogue on delineating the continental shelf some time ago, without getting any response.Regarding possible sanctions against Turkey, other diplomatic sources said these could take the form of sanctions against individuals linked to the company that is engaged in the activities in the Cypriot EEZ, or others that are related to EU-Turkey relations, such as pre-accession funds, dialogue on revising customs union, or dialogue on strategic cooperation.Tsipras and Anastasiades also had contacts with the leaders of countries that have investment partnerships with Turkey, such as France, Germany, Spain and the Netherlands, to discuss the next steps, diplomatic sources said, reporting a "positive" response but also noting the need to remain calm and consider everything carefully.